Lawyer to demand compensation for women ‘beaten’ by police 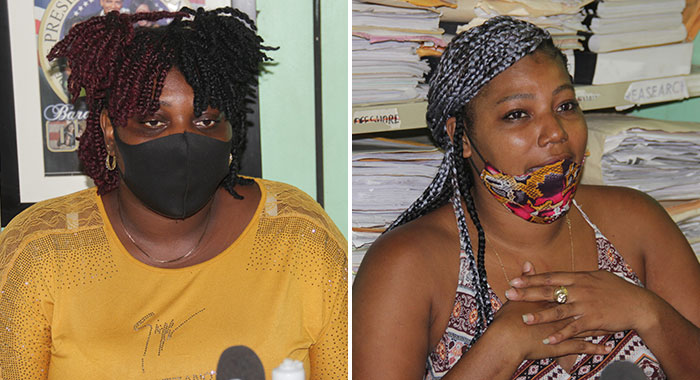 Apology: iWitness News regrets the association of “Nigel John” with certain statements contained in an earlier version of this article. Sergeant Nigel John is a distinguished member of the Royal St. Vincent and the Grenadines Police Force and we apologise for any injury to his reputation caused by the publication.

Edited article follows:
A lawyer for two sisters who say police beat them at their Glen home last Friday say that she will sue the state if the government does not compensate her clients over the alleged assault

“I am really dismayed at what is going on in St. Vincent and the Grenadines,” Kay Bacchus-Baptiste told a press conference in Kingstown on Tuesday.

The lawyer’s clients, Asheka Antoine, 27, and Shomorn Haynes, 32, both of Glen, alleged that police beat them at their home on Friday.

They both received medical attention at the Calliaqua Clinic after the incident.

Antoine said that the beating triggered a life-threatening asthma attack.

Bacchus-Baptiste said that while many of the people who complain about police brutality do not have the financial resources to see their cases through, she is prepared to pursue the women’s case free of charge.

She said that the women’s report suggests that some of the approximately 22 officers who went to the house were members of the Regional Security System team who are in the country helping with security after April’s eruption of La Soufriere.

“It appears to me that they (police) are trying to show off. I don’t know what is going on but it is important that the public hear their (alleged victims’) story because I definitely intend to take legal action.”

The lawyer read, at the press conference, what she could discern from the medical report that Dr. Michael Goodluck issued after attending to the women.

“And I can tell you we are not going to leave this like that. I can tell you I do not know what is going on in the state of St. Vincent and the Grenadines.”

The women said that one of the officers who struck them gave his name as “Delroy Hamilton”, but they later found out that that was a false name.

They further said that they are able to recognise the other officer as he is usually at the mobile police station in Glen, but they don’t know his name.

“First of all, I am going to write the Commissioner of Police and I need to find out all the 20 policemen who were there.

“I am going to ask for full disclosure of all the policemen, including those that are national and non-nationals and who was in charge of the pack. I need him to confirm that no search warrant was issued, because that is what my clients told me, they had no search warrant.”

Haynes told the media that she had spoken to police chief Colin John about the incident, but did not disclose the content of the conversation.

Bacchus-Baptiste said she will copy to the attorney general her letter to the police chief.

“… because I am going to ask for compensation based on the medical record that I have here. If they don’t compensate me, we are definitely going to sue the state.

“We are going to take action against the state and those policemen. This thing has to stop,” Bacchus-Baptiste said.

One journalist noted that while many people complain about police brutality, few are ever compensated.

Baptiste said that clients, generally are “impecunious and it’s an issue of the money to go all the way because these procedures are expensive.

“You have to give notice of intention to sue and it takes a long time but I have had clients being compensated before.

“Generally, I try to assist, I do a lot of pro-bono work but there still has to be some sort of payment involved. But I have, as I said, gotten compensation for police brutality on more than one occasion.

“But, with this one, I really intend to go all the way with it, because when you have policemen beating up on women, men lifting her up and throwing her down, slapping a woman and boxing a woman — this one I am going to have to do pro-bono — at their homes! What is going on in St. Vincent?”

Meanwhile, Antoine said that of all the officers who came to their home, “just three police officers, including the two that did the damage, we could have seen their entire faces”.

The description she gave suggested that the officers were wearing balaclavas.

Speaking to iWitness News on Thursday, the police chief said he was aware of the women’s allegation and had directed them to the Police Public Relations and Complaints Department.

John said that the women and the officers gave different versions of what transpired at the house.

He said that the officers had gone to the house to search for illegal firearms.

John said that all of the officers were Vincentians.

He said that the RSS officers who are in St. Vincent and the Grenadines as a result of the eruption of the volcano”are performing the role of security at shelters and some of the warehouses across the country”.

He said the RSS officers are not performing what members of the public might consider to be regular policing duties, such as the search at the house last Friday.