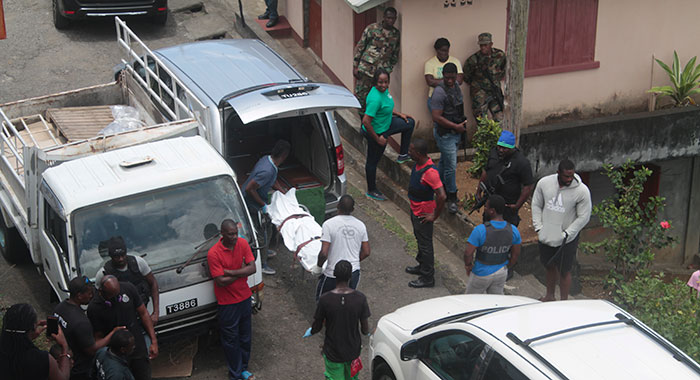 Funeral home workers place Gleason Lewis’ body in a vehicle at the scene on April 26, 2020, as police officers look on. (iWN photo)

The truth of what happened at the Campden Park house on April 26, 2020 when a police officer and a civilian were shot and killed would be revealed if surveillance footage at the house is reviewed, the homeowners say.

Police have said that they shot and killed Gleason Lewis, 36, after he shot and killed detective Sergeant Philbert Chambers, 30, and injured Police Constable 700 Verrol Sam, who were among officers executing a search warrant at the house.

However, Lewis’ parents, Mr. & Mrs. Glasley Lewis, as well as their lawyer, Kay Bacchus-Baptiste told a press conference this week that they believe that Chambers fell to friendly fire.

The Lewises said that while the police thought they had cut the cables to all the cameras that Gleason was using to monitor their activity at the house, one camera was still connected at the end of the entire incident.

They said that the footage from that camera, in conjunction with the others at the house, would give a clear indication of what took place that day.

The Lewis’ disclosed the information at a press conference in which they called for the holding of a coroner’s inquest into the deaths — as the law mandates.

On Wednesday, Commissioner of Police, Colin John confirmed to iWitness News that police removed from the Lewises’ house, as evidence, the digital video recorded (DVR), on which the surveillance footage was recorded.

Regarding whether the police were able to extract the footage from the DVR, the police chief said:

John told iWitness News that the investigations into the deaths were not yet complete and that the Lewises might have contributed to this, having refused to give a statement, citing the advice of their lawyer.

He, however, said that the investigator had indicated that he would be submitting the file in the next few days.

He told iWitness News he was satisfied that the account given by the officers and detailed in the press statement on the day of the incident is what transpired at the house.

“I have seen several persons on social media and otherwise say that they can present evidence of a different version. We are always open to information and evidence. So if these persons have the evidence and the information, they are free to bring it to the police,” John said.

The police chief said that if, for some reason, any such person doesn’t have to give the information directly to the police, they can do so through the Police Oversight Committee.

“There are other independent bodies they can take it to. They can get to the police indirectly,” John said.

He told iWitness News that he had no evidence that Chambers was killed by friendly fire.

“And based on the account from the police officers, based on the information that I have at hand so far, I believe that he was killed by Mr. Lewis.”

Gleason, who, according to his parents, had displayed signs of mental illness in the days before the shooting, was at home alone when the police went to the three-story building to execute a search warrant.

His father told Tuesday’s press conference that once the cameras at the house were working, they would have recorded everything that occurred there, as they were set up to provide an all-round view of the property.

In the immediate aftermath of the shooting, a source told iWitness News that police, having come under gunfire, allegedly from Gleason, realised that he was using the surveillance system at the house to monitor their activities outside of the house.

But, Mrs. Lewis told the media that the police had “cut the wrong wire”.

“The one that was coming down the steps, that is the one that they thought was watching them, but it was not that one. That picked up everything, they could not get that one to cut,” she said, pointing upwards.

“That is the one that picked up what went on…

“We used to see right around the house, the backyard, the two sides, in the front, in the road, people walking. We would see everything.”

Mr. Lewis said that it was Gleason who had installed the surveillance system.

“What is disturbing is that when I wrote the police about the footage and to allow us to see the footage, they eventually responded by saying that Mrs Lewis told them that the camera was no good–”

The lawyer said that Mrs. Lewis denied telling the police this.

“So that was their excuse for not showing us the footage,” Bacchus-Baptiste said.

Mr. Lewis said that his wife “doesn’t know a thing about the camera. All she could do is watch the picture.”

7 replies on “Footage holds answer to how cop, his alleged killer died — homeowners”