Leacock would ‘crawl on my butt’ to highlight issues in SVG 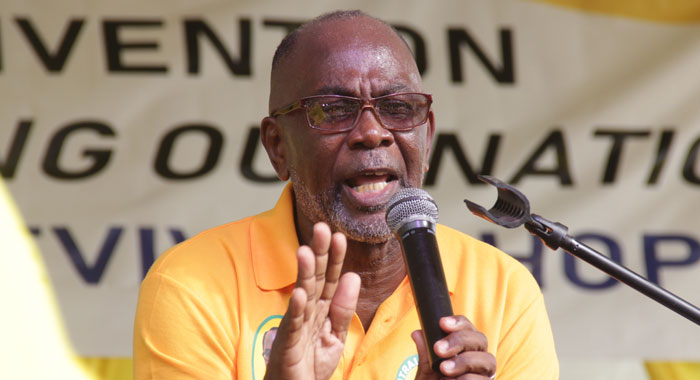 An opposition lawmaker says he is ready to crawl around the capital, if necessary, to highlight what he says are the failings of the Unity Labour Party (ULP) administration.

St. Clair Leacock said on Monday that he has taken a position that he knows Opposition Leader Godwin Friday and their parliamentary colleagues would support.

“We must be there to demonstrate to the people that we are providing the leadership that the country requires at this time and we are not giving them an easy path,” Leacock said on New Times the New Democratic Party’s (NDP) daytime radio show, when Friday was on as a guest.

“The Unity Labour Party and Ralph Gonsalves are too comfortable in St. Vincent and the Grenadines, far too comfortable with the misrule that is taking place, and the hunger and the poverty, and the degradation, the absence of faith, and the crime and the violence and the gun shooting must stop and now,” Leacock said.

“We have to make sure we are at a point where everybody in this country recognises it, that this is not just a fight for me and for you.”

“And the people, everybody, that democracy requires your engagement in between, not just every five years,” Friday said.

Leacock said that Friday is the “majority leader of this country”, a reference to the fact that the NDP won the majority vote in last November’s general elections.

“… and we must be able to go to the town and be there with you by your side and behind you and go forward with you,” Leacock said.

Friday said that too many people are waiting until the crowd gets big, adding that if they do not join in, the crowd will not get big.

Friday said that Leacock is not on his own.

“But the point is [that] the people of this country, they know what is right from wrong and at some point, you have to stand up.”

“I couldn’t care the least whether he say six or six through, thousand, whether it is sixteen. I am going to ensure that I stand against this issue and where we are going.”

The opposition leader said that what is required is for the people to say they have reached a point “where you simply have to stand up and hold your ground.

“You can’t be worried about things that you have been worried about in the past, whether you are comfortable about this and this person might victimise you for that and so forth, because, ultimately, if you don’t defend the things that are fundamental to us that make us who we are as Vincentians, that protects our rights and protect our property and so forth, then, when you are ready to stand up, there will be nothing there to defend.

“And so that is why it is so important. The rule of law is fundamental. It doesn’t give you all your rights but it protects those rights. And so when you can’t rely on that anymore, as I said before, then you will be in serious, serious problem, what you are defending is no longer defensible and that is why I am encouraged by what I see happening, the level of activity, the interest that people are showing in this matter and tying it with broader issues about governance, about accountability, unemployment.”

Leacock pointed out that a few weeks ago, former house speaker, Jomo Thomas admitted in his column that he was wrong to not have allowed the vote of no confidence that the opposition brought against the government in January 2018 to take place.

“That’s a matter which I protest in the parliament personally for a long, long time,” Leacock said.