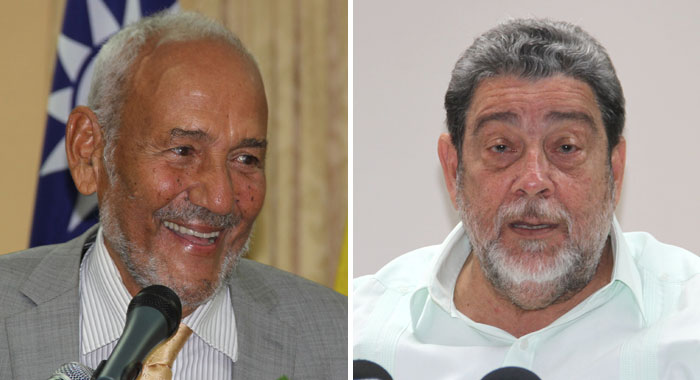 Prime Minister Ralph Gonsalves has warned his predecessor, Sir James Mitchell not to “trespass in areas” after Sir James commented recently on the issue of a government senator’s implication in the shooting of a 60-year-old man at his home.

Gonsalves, speaking on Tuesday after his return from Cuba, said he has seen that Sir James has said that he would have fired the senator, Ashelle Morgan.

“Did he fire Carlyle [Dougan]? Did he fire PR [Campbell]?” Gonsalves said, referring to two lawyers, who resigned as attorney general in Sir James’ administration after they were embroiled in scandals.

“And they resigned over certain things which they admitted. They were not charged with any criminal offence,” Gonsalves said.

“He said he fired persons? Where he fired them?” the prime minister further said in response to comments Sir James made on Boom FM on June 8.

“Look, Sir James, don’t get me –. Look, I respect you. You held this office which I now hold. You held it for 16 years. But don’t trespass in areas, please. Don’t try and rewrite history.

“And I was involved in those issues with my friend PR and my friend Carlyle and I know what are the facts and you know them too.”

Gonsalves, however, agreed with Sir James when he said that Morgan – who is also deputy speaker of the house of assembly — cannot step aside, as Opposition Leader Godwin has called for, because one is either a parliamentarian or not.

“In other words, what he was saying, Friday’s call for Ashelle to step aside is inane; is silly…” Gonsalves said.

“I have to be fair, as a leader of this country, and in building democratic institutions, I have to be fair to people. So anybody comes, makes an allegation against three, four, five members on the government side, they must step aside? And do what? The government doesn’t function?” Gonsalves said.

He said that even when Dougan and Campbell resigned as attorney general, they did not resign as members of parliament.

Diamond Estate resident, Cornelius John, a farmer and businessman has identified Morgan as one of three persons who came to his house uninvited on April 13, when he was shot.

On May 11, at the last meeting of Parliament, House Speaker, Rochelle Forde expelled the opposition leader from that sitting, even as Morgan was allowed to sit. Friday defied the speaker’s rulings in an attempt to get the house to force Morgan from the chamber.

All the opposition members walked out in support of their leader ahead of the passage of an EC$119 million supplementary budget in response to the explosive eruption of La Soufriere.

After leaving parliament, the opposition told the media that they would have supported the fiscal package and would have called for more for persons affected by the volcano.

At Tuesday’s press conference, Gonsalves noted that only government lawmakers were present when the bill was passed into law.

“The other fellas manufactured a walk out or a put out. However, you want to shape it,” the prime minister said.

“I don’t understand you want to tell me big men and a woman over on the opposition side, you can’t walk and chew gum at the same time, you can’t stay and protest about something while staying and debating a matter which is of great importance…

“I am very disappointed to see Sir James joining with the chorus and in the process, Sir James trying to rewrite history. Don’t get my mouth on him this morning because I mean — and depends if I get provoked this morning, he giving you an idealised version about his government, eh? Eh? When you had European countries, including Britain, the United States, Canada, their officials asking if the then commissioner of police, they’re making allegations about him, I don’t want to say anything about him because he is dead — as to whether he running a drug enterprise from inside ah the police force. A man like that wah talk to me? Eh? …

“Sir James, don’t let me start on you, you know. But, I am — But I don’t want to – I going forward. You notice? I going forward. But that doesn’t mean that I leave my mouth inna me moma, to quote Poorsah.”