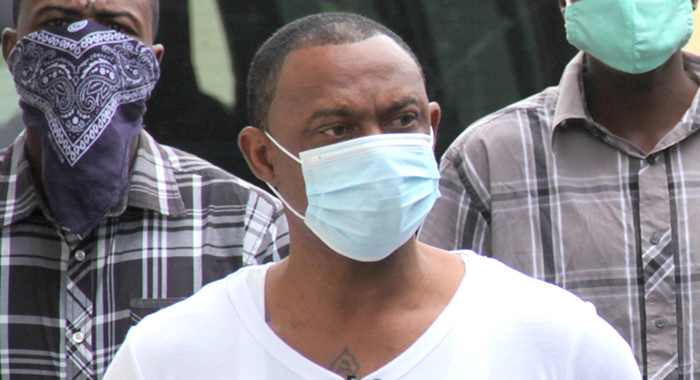 Dexter Quammie on his way to court on Thursday. (iWN photo)

A Rillan Hill man was — on Thursday, his wife’s birthday — jailed for two years and three months for breaching a court order to stay at least 50 feet from her and criminal trespass onto her home last December.

However, Dexter Quammie, 49, who is originally from Dauphnie, will only serve one year and six months of the sentences, as they will run concurrently.

Further, the six months he has spent on remand will be deducted from the sentence.

Quammie committed the offences while on bail in connection to a charge that on Nov. 29, at Rillan Hill, he wounded his wife by stabbing her about the body with a knife at their home, about 5:50 p.m.

As part of the bail conditions, the court had also ordered Quammie to vacate the matrimonial home, pending the outcome of a trial.

The wounding charge has since been upgraded to wounding with intent, an indictable offence.

After the guilty verdict on Wednesday, the chief magistrate adjourned Quammie’s sentence to Thursday, partly to verify whether he had any criminal convictions.

In mitigation, on Thursday, Quammie told the court that he had done his best in life to please everyone and to live a Christian life.

“That’s all I have ever wanted to live: a Christian life,” he said, adding that he would not say that what he did was right.

Quammie further said that based on the life that he used to live, he would like the court to consider that he is sorry for what he did and would make it right if he had the chance.

He said he could not take it back but it was not his lifestyle.

Quammie told the court that he was father of three children, ages 24, 22, and 15, including a female police officer and a secondary school student.

In his submissions on sentencing, prosecutor Sergeant of Police Renrick Cato noted to the court that the virtual complainant is the wife of the defendant and at some point they were living together.

He said that it says a lot when a woman has to seek a protection order against her husband and the Family Court grants it.

Cato said Quammie was aware that he was to remain 50 feet away from his wife, and was further aware, that his wife lived in a house with her daughters and her father.

The prosecutor asked the court to consider what Quammie’s intention was when he went to his wife’s home before 1 a.m.

He said that Mc Fee-Quammie contacted the police and when the police arrived, Quammie was met 25 feet away from the house.

The prosecutor noted that criminal trespass generally carries a maximum sentence of one year, and, depending on the circumstances, it increases to two years.

“Sometimes, it can be very, very frightening especially when you are living with females alone in a house,” Cato said.

He further pointed out that while the breach of court order carries a maximum penalty of two years in prison, to his mind, it is “a serious, serious offence.

“You have no respect whatsoever, no regard whatsoever for an order that is made by the court,” the prosecutor said.

He asked the court to use the sentencing to send a strong message to people who are committing or considering such offences, especially when it involves couples.

“The sentence must reflect how serious the court views offences like this,” the prosecutor said.

In handing down her sentence, the chief magistrate said that the incident that landed Quammie in court was unfortunate and she took no pleasure in adjudicating matters of that nature.

Browne noted that Quammie had indicated that he was trying to live a Christian life, adding that she was certain that he knew of a man’s position as “protector, provider and priest of the household”.

She said that when members of a household, particularly the wife, seeks the protection of the court, “and not the usual turning to prayer”, it is an indication that there is serious need for concern.

The chief magistrate noted that Quammie was convicted after a full trial and the court considered the seriousness of the offence.

“We saw the virtual complainant come and we saw her demeanour. She was quite forthright, articulate …” the chief magistrate said.

She added that when McFee-Quammie related certain aspects of the ordeal “the fear was very visible”.

Browne said that was unfortunate because Mc Fee-Quammie noted that Quammie is her husband.

“It’s really sad to have seen that displayed or evidenced by her,” Browne said, adding that there was a break in Mc Fee-Quammie’s testimony as she attempted to recount the incident.

“This was a really frightening experience,” the magistrate said, noting that the complaint said categorically that the person who came to her house was her husband.

“She said, ‘I know my husband. I recognise him. I have been intimate with him for four years. It was clear to me. I know him.’

“… To see her trembling there, that was really, really unfortunate.”

She said aggravating in the case was the disobedience of the court’s order.

She further pointed out that Quammie went to his wife’s home at minutes to one in the morning, adding that it is pretty difficult to believe his claim that his wife had called him there to apologise to her parents.

“This was a carefully planned activity,” the chief magistrate said, noting the position in which Quammie was found –stooping.

“There could not have been an attempt to make right what you said you had come to do. Not in that manner.”

Browne said there were no mitigating features of the offence and noted that Quammie had no criminal convictions.

The court considered that Quammie has a minor child, adding that it cannot be lost, however, that the offences are serious.

Browne said that Mc Fee-Quammie had indicated that there had been correspondence via telephone.

If there were serious intentions to make right or apologise, they could have been pursued, but not in the matter in which Quammie did, Browne further said.

She said that the court must send a message that breaching a court order is not acceptable.

The court began with a starting point of one year for the breach of court order offence, and ended with a sentence of one year and six months after considering the aggravating and mitigating features.

Quammie was sentenced to nine months in prison for the criminal trespass sentence.

The sentences will run concurrently and would begin from Dec. 13, 2020, when Quammie was arrested.