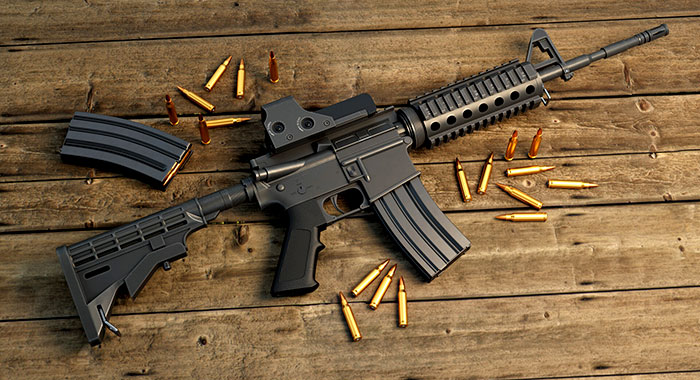 An internet photo of an M4 rifle.

A police officer and a former national footballer were among four persons charged, up to Saturday evening, in connection with the disappearance of firearms and ammunition from the Georgetown Police Station.

Other charges relate to the alleged sale of at least one of the weapons and some ammunition as well as possession of cash believed to be the proceeds of crime.

At least one of the accused will be made to answer an official corruption charge.

One of the persons charged was implicated after  having allegedly purchased one of the firearms and several rounds of ammunition, iWitness News has been reliably informed.

Sources tell iWitness News that the charges surround three Glock pistols and one M4 rifle, which are said to have been stolen from the armoury at the police outpost in the northeast of the country.

The case became public on June 4, when police announced that Commissioner of Police Colin John had ordered the Major Crimes Unit to investigate the disappearance of firearms and ammunition from the armoury at the Georgetown Police Station.

Some 10 officers were transferred from that police station to other outposts across the country.

Police have given no further information on the type or number of firearms and ammunition, when they are believed to have gone missing or when they were found to be missing.

However, police conducted a number of major operations in Diamonds Village in South Central Windward, leading to the recovery of a number of firearms and rounds of ammunition.

A source said that police recovered most of the firearms in that community.

Their attention then shifted to a community on the leeward side of St. Vincent where another firearm and several rounds of ammunition are said to have been recovered.

The people who have been charged are expected to appear before the Serious Offences Court, in Kingstown, on Monday.