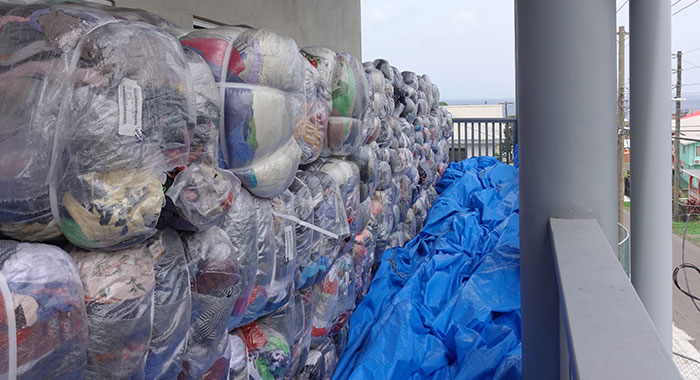 The Richmond Vale Academy will, this week, continue with its distribution of 217 bales of quality, used clothing procured on behalf of people affected by the explosive eruption of La Soufriere in April.

The 217 bales represent 30,000 pieces of clothes and shoes, which arrived on June 10 at the National Emergency Management Organisation’s (NEMO) distribution centre in Campden Park.

The clothing was donated by Planet Aid, Garson & Shaw, and Nic America.

NEMO has been handling the distribution on the windward side of St. Vincent while the RVA is focused on the leeward side.

On Monday (today), the team moves to Chateaubelair, where RVA is hoping to distribute 20 bales of clothing to over 500 people.

Then, on Tuesday, June 22, the distribution moves to Troumaca, where 15 bales will be shared among 250 people. The distribution will take place at the school and will be done in collaboration with teachers.

On Wednesday, it will be the turn of Rose Hall, where a similar number of bales will be distributed at the community centre, with the assistance of local volunteers.

On Thursday, 20 bales will be distributed among 500 people in Petit Borbel, where community leaders and local volunteers will assist in this effort.

The RVA has reserved 50 bales of clothing for distribution in Sandy Bay, but the date of the destitution has not been decided as the all-clear is yet to be given for that Red Zone community.

The 217 bales of clothing include 128 bales of medium and large mixed clothing for adults.

There are also 31 bales of shoes.

So far, two bales of clothing were distributed at the Rose Bank Community Centre and a further four bales at the Peter’s Hope shelter.

RVA is keeping a database to record the number of evacuees in the various locations, by gender and age group, so as to inform the types and quantity of clothing sent to each distribution site.

RVA Director, Stina Herberg assured that the clothing are of good quality and that the teams would endeavour to ensure that they reach those most in need of them.

“The clothes are needed and the quality is good. The island received many donation of clothing from different places since the eruption of La Soufriere. However, there is still there is a significant need for casual clothes and shoes.

“Our goal is to deliver the clothes as soon as possible and secure the fair distribution in the different communities,” Herberg said.

She expressed appreciation for the contribution of NEMO and community leaders to the efforts.

The clothing distribution is the latest in the RVA’s contribution since the eruption of La Soufriere.

In the immediate aftermath of the eruption, RVA was able to save hundreds of livestock and pets from starvation through its distribution of hundreds of sacks of animal feed in the Orange and Red Zone communities of North Leeward.

One reply on “RVA’s clothing distributing moves to N. Leeward this week”