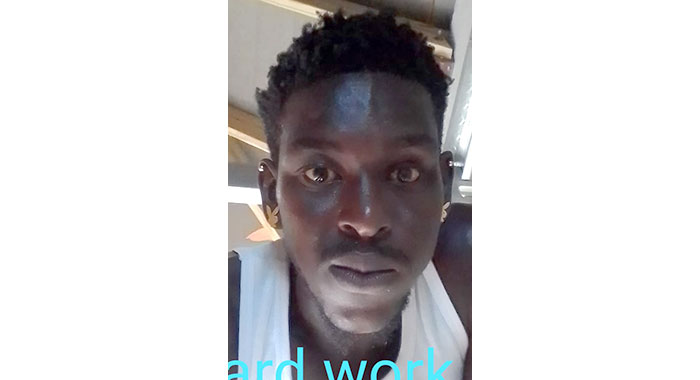 A Canouan fisherman has not been seen since he is said to have set out to sea on Wednesday, his girlfriend Paulette King, has told iWitness News.

Ezley “Black” Martin, 28, originally of Fairbairn Pasture, is said to have gone fishing alone in his boat Wednesday morning.

“I did not get to see him but he normally leaves sometime after 5, minutes to six in the morning. Sometimes, he comes back one, two o’clock, or sometimes four o’clock,” King told iWitness News on Saturday.
She said she was not at home when Martin left.

The father of sons aged 8 years and 14 months owns a small boat, which is said to be between 8 and 12 feet long and outfitted with an 9/5 HP outboard engine.

The fishing boat, which is bluish green on the outside and red/orange inside, is emblazoned with the name “Comfort”.

Christopher Quow, another Canouan fisherman, told iWitness News separately, on Saturday, that his boat and Martin’s usually go to sea together.

He said he last saw Martin around 6 a.m. Wednesday, when he (Quow) cancelled his fishing trip because of a disagreement with his crewmember.

Quow told iWitness News that he and Martin get along well.

“I hired him a couple times and he eventually got his own boat so we stick together when we are going out. He has his own and I have my boat, along with a workman. His boat is smaller so it is normally he (Martin) alone.”

Quow said that on Wednesday they were getting ready to go out to sea, but he (Quow) and his employee got into an argument so he took the employee back to the shore.

He then went back to catch bait but cancelled the trip after a conversation with his father about what had transpired with his employee.

Quow said he decided not to go to sea but to spend the day with his family.

He said he left Martin catching bait about 100 metres from the shore.

“The wind was pretty high and I said I wasn’t going out there to kill myself to mind myself,” said Quow, who is also a night watchman at the Canouan Government School.

Quow said he went to look for Martin at the wharf around 2 p.m., hoping to buy fish from him to fill some orders.

“I went there, he was not there and other people were asking for him. I said this is the time that he normally come in so just give him a while longer. At that time, my survival instinct kicked in and I said I was going to tell his girlfriend to contact the coast Guard, just to be sure.

“I was concerned because I know that is the time I would normally start my engine.

Quow said that King assured me that Martin would eventually return.

“But, we waited too long.  We waited. We waited,” Quow said, adding that after 4 p.m., when he was going to work Martin had still not returned.

Quow told iWitness News that two ferries travel between Kingstown and Canouan on Wednesdays so he usually gauges for the second boat and travel back to the island around that time.

He said that the area where they usually fish is near the passage between Bequia and Canouan and he fishes there, because in the event of an emergency, his chances of rescue are greater.

Quow said the last time he saw Martin, he was throwing his net about 100 metres from the shore, trying to catch bait.

“We had a next guy near the land, his name is Lando. He only does rock fishing… He was fishing there and he told me Black went up.  We have a fishing ground off Canouan. It is a shallow bottom. It is a place where as soon as your nylon goes to the bottom, fish is on.

“He would probably go there to get a faster catch. Out there, it is between Canouan and Petit Canouan, which is the roughest part of Canouan. It is a little piece of island where a lot of big swells does be throwing off. A lot of boats go missing and sink in that area as well.”

He told iWitness News, that last week Saturday, when Martin started his engine it was racing.

“So I tell him make sure the engine is in neutral before you start it. And it was still racing, so I told him, well, your engine throttling is too high. You need to throttle it down. So I don’t know if he ever sorted out the problem.”

Quow said that someone told him on Tuesday that Martin had had some engine problems.

He said he was not sure on which day Martin had the engine problems as he (Quow) did not go to sea on Sunday or Monday because he was servicing his engine.

Meanwhile, King told iWitness News that the last information she has is that Martin was last seen catching bait near Glossy Bay.

“And from there, nobody knows where he went. If he went left, right, nobody knows. So since Wednesday we haven’t seen him,” King told iWitness News.

She said that her boyfriend did not have food or water, or any communication device.

She said that he would usually take his cellphone, but it malfunctioned a few weeks ago, after getting soaked.

King told iWitness News that the Coast Guard set out to sea Wednesday evening after the alarm was raised, but returned to shore after they “encountered difficulties”.

Searches since then have not turned up the missing fisherman or his boat.

Martin is feared missing at sea less than a week after three Kingstown-based fishermen — Angus “Pharaoh” Webb, of Edinboro, Lennox “Grand Charge” Phillips of Ottley Hall, and their captain, Bernard “Butters” Dublin, of Rose Place — were rescued 190 miles west of St. Vincent 11 days after they developed engine problems while returning from a fishing trip north of St. Vincent.

The trio, who were in a fibreglass boat outfitted with an 85 horsepower outboard engine.