It is not right. It could be me 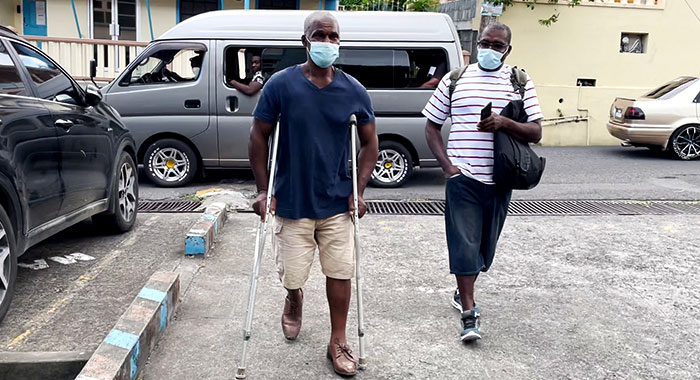 On Friday, June 25, when I saw Comrade John hobbling to the courthouse on crutches, it hit me that this could be me. It could have been anyone of us who supported our party and our government for many years.

I have to admit that the thought of that had never come to my mind. The people who seem to be making our country look bad, are always those aligned to the NDP. At least, that’s the first thing I always saw because, truthfully, it is what we’ve been made to believe and accept as told to us by our comrade leader. We never really paid any attention to the issue.

If it wasn’t about making the country look bad, then they were “Ralph haters”. With those things in mind, I’m just accustomed to dismissing them as rabble-rousers. I ignored the Bigger Bigs issue regarding his lands; I ignored the Toussaint and De Freitas issues. I ignored the Three NDP Teachers too and the many other issues that came up over the years. They were all just trying to bring down the comrade. That was the thought. In 2011 when protests erupted, partly over the changing of the laws to seek permission from the DPP to bring private charges against someone, I didn’t bother with that either.

It was just a bunch of NDP people blowing things out of proportion because they hate Ralph. My party is in power. This is not an NDP government. I don’t have anything to worry about, or so I thought.

Now, I am worried. As a long-time party member and supporter, I am worried, deeply. I thought these things only happened to NDP people, and I didn’t care if it did; but here it is that one of our own comrades finds himself in the same position that I never once thought would happen to us.

What’s bothering me too is that those who are fighting for him are not members of his ULP family. It’s mostly NDP people I’m seeing offering support. How could this be? I know many of us are afraid to speak publicly. We call each other privately and talk, but never publicly. Truth be told, we don’t want to make our party look bad. The last two elections, I received building materials too, like many of our party supporters, and I can visit the office whenever I need something. I even send other people to get help.

I tell you if I got two hours of sleep Friday night, I got plenty. To see our own comrade limping to court and the way things going, it’s a hard one to swallow. I did not expect this to happen to one of ours, and now that this issue has hit home, I don’t know if I can exchange the material things that I get for equal rights and justice. It is not right, and I must think long and hard about how I vote in the future. That’s if I decide to vote again.

I love my party and the comrade, but I cannot support this in good conscience. This is not right.  We have to change course. What’s going on here is not right.