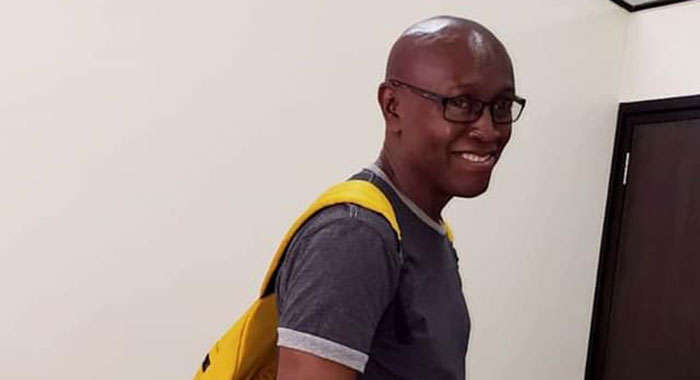 A 52-year-old tailor survived a slashing wound to the neck at his home in Old Montrose, reportedly by another villager who came to the house, ostensibly seeking tailoring service.

Roger Brazil told iWitness News, on Saturday, that he was at home sometime before 9 a.m., last week Sunday, June 20, where he conducts his business.

He said that the man, for whom he always provides tailoring services, came with a black bag, saying he needed some adjustments to pants to be worn to a wedding.

“When I opened the bag, I saw it was like a damaged jeans. So I said, ‘But people don’t wear these things to wedding’,” Brazil told iWitness News on Saturday.

Brazil said that the man told him that he only needed the waist of the jeans adjusted.

The tailor said he took the bag, went into the sewing room and the gentleman also entered and stood behind him.

“It was whilst I sewing the pants I feel like my neck hold and he start sawing. I screamed,” Brazil said.

He said that he called to his mother, telling her that the man was trying to cut his neck.

“That was it. Just like that Brazil said,” adding that the man did not say anything to him before the attack.

He said that when his mother came into the room, the man stood as if he had frozen, then ran through a door leading to the rest of the house.

Brazil said that his mother told him that even after he was taken to the hospital, the man was in the house, unable to leave because of how another of the entry doors is secured.

The police later apprehended the man, but it is not clear where he was arrested.

Brazil told iWitness News that he does not know the man to have any mental health issues “but when he come by me, he was stink ah weed.

“I did not know he had a weapon on him until he hold me. I even told the police that it was a big knife, because it happened so fast, but they told it was a cutlass. So I guess he had it in his clothes. I think he came to kill and rob me.”

Brazil said that during the attack, “I was just fighting for my life. God made it happen so that my mother was at home. If she was not at home, I would not be talking to you right now.”

He said that his mother was at the time getting ready to go to a funeral.

Brazil said that the doctor told him that had the wound gone a little deeper “that would have been it for me”.

He, however, said he did not ask the physician how many stiches the wound took.

“I just shut my eyes and they did what they had to do, which I think they did a good job.”

He said that he has reported the matter to the police and will pursue the matter in the court.

“God is so good, no pain whatsoever. I am eating and everything.”

Two of Brazil’s fingers sustained cuts and had to be stitched. “But no pain whatsoever,” he said, adding that he cannot sew right now.

“I don’t even want to go in that room right now. When I came out [of the hospital] on Monday, I did not go in the room, but Tuesday, they (the police) brought him back by me and they met his slippers in the room. I think they got the cutlass in the room and everything.

“He report to them and tell them I tried to touch him. How could I touch when my back was turned? He came to kill me,” Brazil said.

He said that he and his assailant had never had any altercations in the past.

“Nothing whatsoever. I sew for the mother. Me and the mother are good friends on Facebook.  One of the aunts came to see me in the hospital on Monday and she tell me the mother came down the hospital to see me, but the police didn’t let her in. but the aunt had nothing good to say about him.”

Brazil said his mother is very traumatised by the incident.

Photos of Brazil’s injury have been circulated on social media. The injured man said he had sent them to some friends and they might have been leaked.

He, however, said that he does not mind. “I want people to see how wicked this guy is.”

On Friday, police, in their regular bulletin, said they were investigating the circumstances surrounding the attempted murder of a 52-year-old tailor of Old Montrose.

“Preliminary investigations revealed that an 18-year-old student of the same address allegedly inflicted wounds to the virtual complaint’s throat, left and index finger with a cutlass. The incident occurred at Old Montrose,” the police said.

Police are asking people with information about the incident to telephone 1784-456-1339, 1784-456-1810 any police station or to speak with any police officer with whom they are comfortable. “All information will be treated confidentially,” the bulletin said.

One reply on “Tailor’s neck slashed during attack”