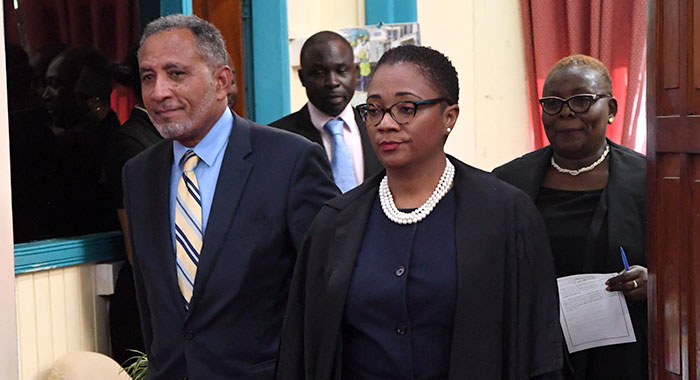 Some questions submitted by the opposition have not been accepted for inclusion on the order paper for the next meeting of Parliament, Opposition leader Godwin Friday told a press conference.

“It has become a too-frequent practice on the part of the speaker, the current speaker, of objecting, at least at every meeting, to the form and the content of questions that members pose, seeking to rewrite parts of questions; to disallow parts of questions,” Friday said.

“And you are never sure when you submit a question whether it will be on the order paper as you presented it. I have been in the parliament now for over 20 years and I tell you this had not been the practice over those 20 years that I have been there. I don’t know how it’s become, all of a sudden, so difficult to write and pose questions to members to answer,” Friday told a press conference on Wednesday.

“This is an unnecessary hurdle or obstacle that has been put in the path of members as they seek to obtain information from the government on behalf of their constituents, on behalf of the people.”

He noted that parliamentary representatives are elected to represent the people of the country.

Friday said there are 17 questions on the order paper. Each opposition lawmaker is allowed three questions, making it a maximum of 24 under the current configuration of Parliament.

Meanwhile, Central Kingstown MP, St. Clair Leacock, who is also an opposition lawmaker, told iWitness News separately, on Wednesday, that one of his questions was rejected.

Leacock said he wanted to ask why Superintendent of Prisons Timothy Hazelwood, who was a superintendent of police before taking up that position, was among police officers in the assembly chamber when the opposition leader was evicted last month.

“I wrote a question to be asked and I understand that the question is not going to be allowed, but I am going to ask that question when I get the opportunity to do so: Why my question was not allowed to be asked?

“Because it must be a public interest issue for the superintendent of prisons, acting as a policeman because that is what the regulation of the house permitted — for the speaker of the house to ask of the commissioner of police to be there,” Leacock said.

He raised questions about Hazelwood’s presence in the national assembly.

“What was his purpose behind me? To intimidate? To arrest, to apprehend, to fling we just as they did with Daniel Cummings?” Leacock said, referring to March 2011, when opposition lawmakers were physically removed from Parliament.

“… is he in a dual role? That’s at a time when he couldn’t even find the prisoner that had escaped from his own charge. He switches from prisons to police and this is a person who has done three… four years now of extended retirement and [is] on short-term contract. Is he indebted to the ruling regime? It is not the first, second or third time that he finds himself in this situation. I find it appalling.”

iWitness News was unsuccessful in its attempts to reach House Speaker Rochelle Forde at her law chambers.

At the time of publication, she had not returned a call, as requested.