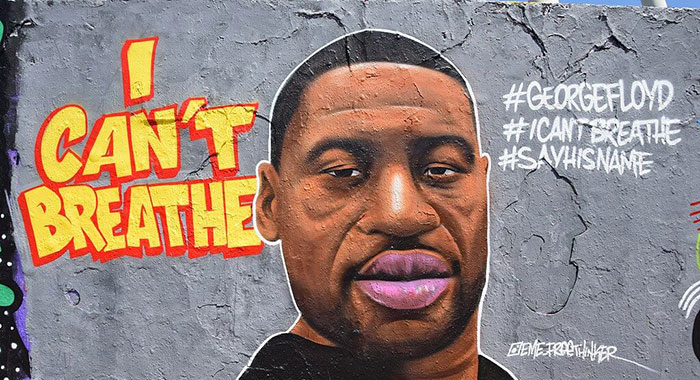 The president of the Public Service Union says that protests ensured justice over the May 2020 killing of George Floyd in the United States.

On May 25, 2020, George Floyd, a 46-year-old black man died in Minneapolis, United States, after Derek Chauvin, a white police officer, kept his knee on Floyd’s neck for at least eight minutes and 15 seconds, even as Floyd repeatedly said, “I can’t breathe.”

The killing triggered widespread, sometimes violent, protest in the United States and other places around the world.

Last month, Chauvin was sentenced to 22½ years in prison for the murder of Floyd.

“It is the people that made it happen. Because if people who were protesting did not stick to the task to ensure that justice was done, you may have had a different story today,” Boucher told a press conference in Kingstown today (Monday).

He used the press conference to rally support for a protest in Kingstown, on Tuesday, calling for justice in the case in which John was shot at his Diamond Estate home on April 13.

Assistant Deputy Director of Public Prosecution, Karim Nelson, has been charged with wounding John and unlawfully discharging a firearm at the 60-year-old businessman.

Ashelle Morgan, a lawyer and government senator, who is also deputy Speaker of the House of Assembly is charged with assaulting John with intent to wound him.

John is alleged to have been shot after Morgan, Nelson, and a third person whose identity has not been disclosed, visited his home on April 13.

The charges were brought on June 24, more than two months after the shooting, and amidst sustained public outcry, including protests in Kingstown.

Boucher said that he is convinced that in the Floyd matter, the courts in the United States were “very mindful that if there was a miscarriage of justice, you could not hold back what would have happened in America because the people were insistent that justice must be done.

“In St. Vincent, we have to make sure that in this particular case justice is done,” the PSU head said.

“We, the people, regardless of the intention of the judiciary or the political heads, the people in St. Vincent and the Grenadines, the trade unions, the churches, the council of women, the Human Rights Association, all of these associations and organisation and the people themselves have to make sure that justice is done,” he said.

“We have to send that message that if at the end of the day, it appears as if there is a travesty, it would not be accepted. We cannot continue to accept these things for years upon years.

“It has to come a stop at some point and I think now is a turning point in the life of St. Vincent and the Grenadines, of our people, and as a union, we want to make that particular call to our people to stand firm because if we don’t stand, I am fearful that at the end of the day, we will be questioning ourselves what has just happened.”

Boucher urged workers in the public and private sector, and members of civil society to join the protest to highlight issues of national concern, including what he said was the government’s advocacy for mandatory COVID-19 vaccination.

He said that mandatory vaccination is illegal, notwithstanding the prime minister’s comments to the contrary.