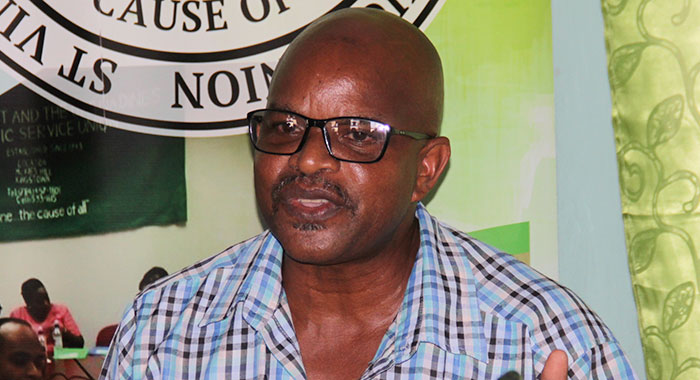 President of the Public Service Union, Elroy Boucher in a July 2019 iWN photo.

The Public Service Union (PSU) is calling on the private and public sectors to join the protest slated for tomorrow (Tuesday), in Kingstown.

PSU president, Elroy Boucher told a press conference today (Monday) that the churches and other civil society organisations should also join the demonstrations, to highlight issues of concern.

“Tomorrow is a day to protest against all injustices, not just the Ashelle Morgan/Cornelius John injustice,” Boucher told the press conference.

“So we have to go on the protest line against injustices with the public service also, in addition to sending the message that justice must be done in the case that is currently before the court,” Boucher said.

“Those of you in the private sector, this forced vaccination and where your jobs are threatened, you need to come out and you need to protest against that,” he said, noting that Prime Minister Ralph Gonsalves has said that private and public sector entities can dismiss people who refuse to take a COVID-19 jab.

“You need to say enough is enough, because it is discriminatory and it is illegal.  All of those are injustices that we, as a people in this country, need to rise against,” Boucher told the media.

He said that the union is calling for justice in the shooting of Cornelius John, 60, at his Diamond Estate home on April 13.

Assistant Director of Public Prosecution, Karim Nelson has been charged with wounding and unlawfully discharging a firearm at John in connection with that shooting.

Ashelle Morgan, a lawyer, government senator and deputy speaker of the House of Assembly, has been charged with assaulting John with intent to wound him.

John, on the other hand, has been charged with one count of using threatening language against Morgan and two counts of the same offences against his wife.

The trio, of which all have been granted bail, was scheduled to reappear in court yesterday (Monday) but the hearing was adjourned to Aug. 17.

Boucher noted that before the charges were laid, his union had issued a statement calling for justice in the shooting matter.

He said that the union was concerned that there had not been an arrest and the alleged assailants had continued in their jobs.

He said that the prime minister made a distinction between what happens in the public service and Parliament, and, in the case of Nelson, in the Judicial and Legal Service Commission when someone is charged with a crime.

“But I want to just point to what I call principles,” Boucher said.

“And there are times that we have to get rid of the legality and address the ethical and moral issues in our country.”

The commission may suspend that person with or without pay.

Boucher said that Parliament is the highest body that makes law, and, therefore, the PSC is lower than Parliament in his mind.

“And if integrity is so critical to the function of the Public Service, why is not the same principle applied with respect to whether it is the DPP’s office, or in Parliament?” the trade unionist reasoned.

“And that is very important. It is extremely critical for the development of our people, the examples that we set. The examples set within parliament should be examples for our young people to follow…” Boucher told the media.

“And, therefore, you cannot make a distinction; you cannot hide a lack of caution in legalism. You cannot do that. It can be firmly on the issue of the principles, the ethics that govern these institutions and the morals. That has to be the pinnacle of morality. And that is not what we are seeing.”