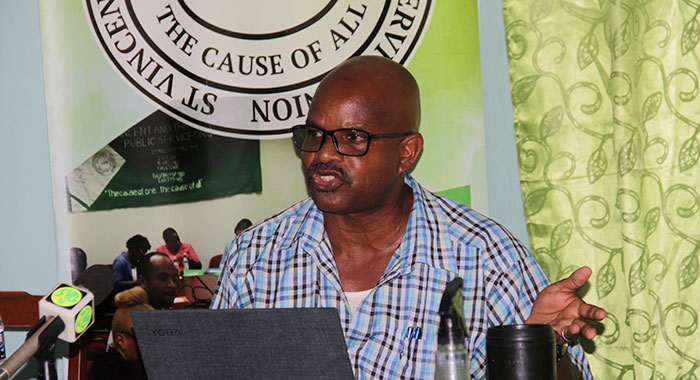 President of the Public Service Union (PSU), Elroy Boucher, without consulting the workers directly affected, on Monday, announced the end of what was supposed to be a one-week withdrawal of service at the Mental Health Rehabilitation Centre.

Boucher made the announcement at a press conference moments after receiving a letter from Governor General Dame Susan Dougan, in response to one the union had sent informing her of the planned industrial action.

“We received this letter today, in fact, a few hours ago, and, in fact, there was no discussion with the executive or the workers,” Boucher said.

He said that the workers had learned, via the press conference, that they are to return to work on Wednesday.

“There are times when, as the head of an institution, you have to act and I think from my experience with respect to both executive and workers, I know that they will have that confidence in the leadership to even make decisions on the spot that may otherwise, if time permitted, would have been discussed,” Boucher said.

He announced the end to the industrial action even as there was no indication from the government that it was willing to address the issues about which the union had been complaining for more than a year.

The union leader said his decision to call off the industrial action was based on a comment in the governor general’s letter, which he said he understood to mean that the ceremonial head of state was willing to intervene in the matter.

The governor general does not intervene, publicly, in matters of governance of the country.

At Monday’s press conference, Boucher traced the history of the issues at the Mental Health Rehabilitation Centre.

He read letters that the union wrote to the minister of health in March, May and July 2020 in its efforts to resolve the issues.

He said that nothing has changed and the problems continued to the point that over 90% of the workers petitioned the Ministry of Health last month, asking for a change of management.

“Management is not listening to them. In fact, management has been trying to intimidate them,” Boucher said.

He said that the ministry sent the petition back to the management, and the practices at the psychiatric hospital continued.

Boucher said it was at that point that the union decided on withdrawal of service, and, in keeping with the Essential Services Act, wrote the governor general informing her of the worker’s intention.

“You are getting nowhere and we get to the point where our backs are against the wall. What else can we do?” Boucher said, referring to the decision to withdraw service.

He said the union copied to the minister of health the letter it wrote to the governor general.

“I would have figured that if the minister of health was so concerned that he would have reached out to try and see how he could [address] the situation and have some sort of dialogue.”

Boucher said there was no response from the minister “which seems to tell me and tell us, as a union, that they really don’t care about the staff, and, therefore, don’t care much about the patients.”

He said that the COVID-19 outbreak, and the resultant death of a patient at the Mental Health Rehabilitation Centre last year could have been averted had the centre been managed differently.

Boucher said that politics is at play, protecting the management of the facility.

“Our business is not about partisan politics. Our business is strictly about the protection of the rights of workers and ensuring that it is a safe environment in which the workers are operating.”

withdrawal of the service ‘successful’

Boucher said he was advised that the withdrawal of the service has been successful with 60 to 75% of workers staying away from work. Many of those who turned out were persons who were on probation and feared that participating in the industrial action would put their jobs in jeopardy, Boucher said.

Boucher said that the union intended for the action to continue throughout the week “and like I said, because we have not heard from either permanent secretary or the minister of health.

“And I will state again, in my view, they really don’t care.”

He noted receipt of the letter from the governor general acknowledging receipt of his letter in relation to the withdrawal of service.

Boucher said that the governor general wrote that she was “truly saddened when the most vulnerable persons in our society are placed at a disadvantage”, adding that the patients will “suffer tremendous hardships” as a result of the industrial action.

The head of state said that the withdrawal of service is also particularly troubling when the nation is experiencing unprecedented adversities due to several recent catastrophic events “and we need each other to surmount the challenges faced by everyone.

“‘The cause of one is the cause of all’ is your motto and maybe at this time you may wish to give greater consideration to that motto in the use of ‘drastic’ measures which will severely impact the wellbeing of the mentally challenged patients at the centre while the matter is being addressed,” the governor general wrote.

Boucher said that he agrees with the governor general and that it was not and still is not the union’s desire to have any adverse impact on the patients.

“So we will wait and see if there is any discussion given this correspondence from the governor general. But I urge the authorities to act in the interest of the patients, the staff and the public. And that is how they ought to be acting,” Boucher said.

Boucher said that the union had not asked the governor general to intervene “but from her letter, she seems to be inferring that she will initiate some sort of discussion with the authorities, because she said ‘allow the matters to be addressed’, but we have not involved her at that particular level”.

Asked what part of the letter caused him to come to the conclusion that the governor general would intervene, Boucher read the section where the head of state said:

“‘The cause of one is the cause of all’ is your motto and maybe at this time you may wish to give greater consideration to that motto in the use of ‘drastic’ measures which will severely impact the wellbeing of the mentally challenged patients at the centre while the matter is being addressed.”

“So I reached that conclusion because from the letter; there seems to be that confidence that the matter will be addressed.”

He said that in the trade union movement, “you have to give way, give space to dialogue. And you have to give that opportunity for a solution to the issue. The fact that she has written, my hope is that the fact that she has responded in this particular way is that she herself would reach out to the authorities, whether the minister or whomever and implore them to intervene to see if they can bring solution, to have a dialogue.

“She did not expressly indicate but it must not be said that there was an opening and the union decided to be stubborn and proceed.”

Boucher said that the workers can withdraw their service at a time that the union is in active conversation with the health authorities.

“It can happen while there is a withdrawal.”