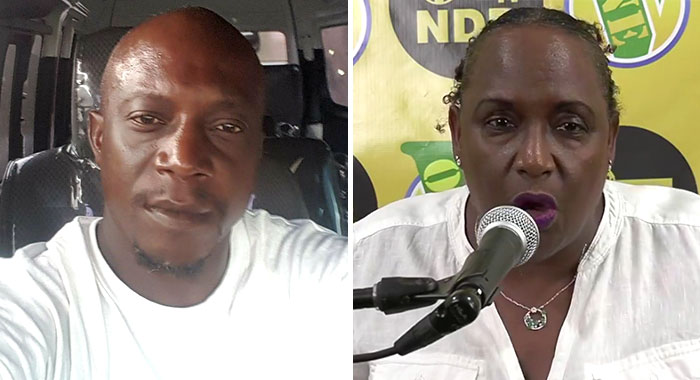 Lawyer Kay-Bacchus, left, said that the third person present at the time of the shooting is Veron Adams, left.

The third person who was allegedly present when Diamond Estate resident Cornelius John was shot in his left leg at his home on April 13 is Vernon Adams.

John’s lawyer, Kay Bacchus-Baptiste, told a virtual public meeting of the opposition New Democratic Party on Monday night that Adams is a cousin of and driver for assistant Director of Public Prosecution, Karim Nelson who is alleged to have shot John.

She further expressed “absolute horror” that the evidence of a supposedly independent eyewitness had not been included in disclosure and called on the public to join the protest in Kingstown on Tuesday (today).

The information revealed by the lawyer suggests that the prosecution does not intend to call the alleged eyewitness to testify in the trial.

Bacchus-Baptiste’s comment suggested that the identity of the third person — who had so far remained a mystery — was garnered from disclosure in the case, in which Nelson is charged with wounding John and unlawfully discharging a firearm at John.

Senator Ashelle Morgan, who is also alleged to have been present when the shooting took place, has been charged with assaulting John with intent to wound him.

John is charged with using threatening language to Morgan and two counts of the same offences against his wife, Nicole John.

The matters were scheduled to be heard at the Calliaqua Magistrate’s Court yesterday (Monday) but were adjourned to Aug. 17, as magistrate Zoila Ellis Browne’s contract is said to have ended.

In her comments at the NDP meeting, Bacchus-Baptiste, who was a candidate for the party in the November 2020 general elections, said:

“When I got the disclosure, to my horror, my absolute horror — I am deeply saddened by the administration of justice in this country — … the eye witnesses who were present and who could tell you whether or not a cutlass was there, what happened to Mr. John, whether he said the things that they were saying he was shouting and saying, the person disappear.

“There is no disclosure, which means that they do not intend to call the main witnesses in this matter.”

She noted that she had said from the inception that when the police went to John’s house after he was shot, they took up the spent shell and took photographs.

“… the photographs will show, unmistakably, there was no cutlass present. No mention of that,” the lawyer said.

Bacchus-Baptiste noted that she has said that if she were defending Morgan, she would be acquitted.

“They have set it up that way. They have taken her out of the medical report,” she said, adding that there was no investigation into the gun that Morgan is alleged to have used to assault John.

“… they have given her the least, smallest charge that they could. No wonder she said that she is going to, in one month, go back into Parliament. She is supremely confident.”

Morgan, a government senator and deputy speaker of the House of Assembly, has applied for and has been granted one month’s leave of absence, in the first instance, from Parliament.

Bacchus-Baptiste said she wanted to make it clear that she was not saying that when someone is charged they are guilty.

“I’m a defence lawyer. The Constitution guarantees you are innocent until proven guilty. That is our law and I stand by that,” she said.

“But, it is the job and duty of the Director of Public Prosecution to ensure that when she brings a case, the evidence that is best suited to win that case must come before the court,” Bacchus Baptiste said.

“It is appalling, it is alarming that the major witnesses in this matter as to whether a cutlass was there, the condition Mr. John was in, what happened just before, who said what, not a note. No disclosure.”

She said that if she did not have any inkling about this witness and that the witness had given a statement to the police, the public would have never known.

“The case would go through as if the only witnesses are those who are there, the three of them: Vernon Adams and the DPP Nelson and Ashelle.”

She said that in a civilised society, the persons responsible are to ensure that there is equality before the law.

“When we cannot guarantee that, it is pandemonium,” Bacchus Baptiste said.