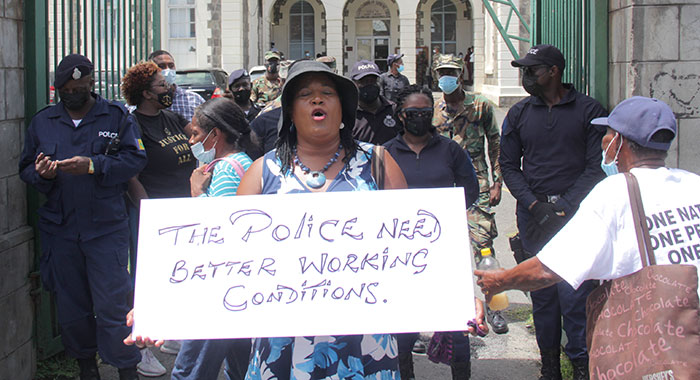 Protesters and police officers in Kingstown on Thursday. (iWN photo)

A police officer was reportedly transferred from the paramilitary Special Services Unit to beat and patrol on Tuesday, after he allegedly intervened and stopped his colleagues who almost pushed a protester into a drain in Kingstown.

Opposition Leader Godwin Friday told Parliament, on Thursday, that he was reliably informed that the incident occurred between the Coreas Building and Building and Loan Association.

Friday said he was told that Black Squad officers were seen pushing a protester dangerously close to the drain and threatening “that person with injury”.

He said that another officer, who recognised the danger and the unnecessary use of force that was being exhibited, went and told them that that is not what is to be done.

“And you would think that that is the end of it. But I am informed that the officer then went back or attempted to go back to barracks, was confronted by the commissioner of police who asked him or said that he heard that he was suggesting – I don’t know the exact words, from what I am told – that the police officers were abusing protesters, and that if he thinks that because his mother calls into NICE Radio regularly and that he comes from Bequia that he could do, essentially, what he did. And then that officer, with immediate effect, was transferred to Beat and Patrol.”

Friday, however, said that his understanding was that as the senior officer there, the SSU officer was, essentially, providing guidance to junior officers, preventing them from unnecessarily injuring an “unarmed person who was there exercising her democratic right”.

The opposition leader said that in the same way that Prime Minister Ralph Gonsalves had looked into a video that was later found to show Trinidadian rather than Vincentian paramilitary officers, as previously thought, acting unprofessionally he should also look into the allegation.

“But I don’t understand how it is on one hand you could encourage professionalism on behalf of the police, and here you have an officer who is exercising his judgment as a senior officer in a situation and then his action gets coloured by the fact that his mother calls in on NICE Radio and that he is from Bequia.”

Responding, apparently, to a comment from across the aisle, Friday shouted:

“Don’t say, ‘Oh God!’ Investigate it. That is the truth. If I am wrong, go and investigate it and come and tell me.”

Returning to a calmer tone, the opposition leader said, “And then to go and transfer the officer, from SSU to Beat and Patrol, that’s not a promotion. To me, that is saying you are now marked. Your mother does call in on NICE Radio, you come from Bequia, you are now marked — from SSU to Beat and Patrol.’ And what is that going to do for that officer.”

Responding to the opposition leader’s comment, the prime minister said that observers and the police had drawn to his attention several incidents that occurred during Tuesday’s protest.

“I would not speak to any of those reports as authoritative, other than what I say, I have heard.

“The conclusion, however, on Tuesday, is that the police acted with extraordinary restraint in all the circumstances. And that has come from very responsible persons in civil society, including the churches. I have received a lot of communication on this,” the prime minister said.

Gonsalves, who is also minister of national security, continued:

“The restraints were such that, factually, there is a vehicle which, allegedly, broke down but remained blocking the road for a particular period of time, before it was moved away. I understand that certain inquiries of a particular nature are being made in relation to this matter, so I can’t comment on that either.

“I have gotten reports from a number of different sources in relation to this or that police officer. But I will caution the honourable leader of the opposition not to accept the word, without more, of a policeman who was transferred by the commissioner of police from one particular unit of the police force to another. I will just caution that.”

Friday, however, said that he did not say that he had gotten the information from the police officer.

Gonsalves responded: “I am assuming that the police officer told you that. If that assumption is wrong, and your source is from some other place — that’s why we must not comment on these things which are unsubstantiated.”

The prime minister said he is not going to ask the commissioner “to investigate why he, the commissioner of police, transferred John Browne from one particular area to another area in the thing.

The prime minister said that he had told Commissioner of Police, Colin John:

“‘Commissioner, you’re internal management of the police in terms of how you view a security matter, that’s in your domain; I can’t tell you what to do. I say to you, however, that persons have the right to peacefully protest within the framework of the law and I do not support any police officer beating a peaceful protester.’”

“Let us be honest with ourselves, the poor showing of the NDP on Tuesday in the house and outside of the house made members inside of the NDP start to criticize the leadership of the NDP. It’s inside of the public domain. But no leader, however, he may be in his party, must use the country as a prisoner to his internal difficulties.”