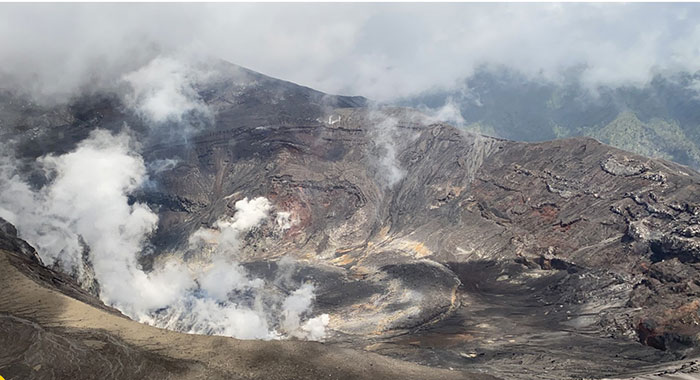 The Government St. Vincent and the Grenadines has been advised to lower the volcano alert from orange to yellow, less than three months after the last eruption at La Soufriere on April 22.

Prime Minister Ralph Gonsalves told Parliament on Tuesday that Cabinet will consider the recommendation of the University of the West Indies Seismic Research Centre (UWI- SRC), which monitors La Soufriere.

Gonsalves read a June 30 letter from UWI- SRC Erouscilla Joseph which said that with the restoration in capacity of the monitoring network and given the level of volcanic activity, consideration should be given to the lowering of the volcano alert level to yellow.

Yellow is level two of four, and means that the volcano is restless, seismicity and/or fumarolic activity are above the historical level at the volcano, or other unusual activity has been observed.

With a yellow alert, scientists are expected to bring the monitoring system to full capability and alert civil authorities.

In her letter, Joseph said that measures should be taken to minimise the risk to individuals and communities in the orange and red zone associated with the volcano in its current state of unrest.

These include but are not limited to risk to individuals vising the summit areas from possible phreatic explosions and hot steam venting from the crater of the volcano and risk to communities on the lower flanks of the volcano due to the impact of lahars on the river valleys.

Joseph said that such lahars are more likely but not limited to periods of heavy rainfall.

“It should be noted that given the volume of material deposited from the explosion, this activity can continue for the foreseeable future,” Joseph said, adding that there are risks associated with hot unstable deposits in the western valleys.

She said that visits to the upper parts of the volcano, particularly to the summit should be minimised and limited only to essential workers.

These visits should be carefully planned and coordinated with the Belmont observatory.

Plans should cater for a possible restart or escalation in the activity that may require a review of the alert level and management of population access to high-risk region of the volcano.

Emergency plans and protocols should cater for the on-going impact of lahars, particularly in villages on the eastern side of the volcano, which may be marooned during period of heavy rainfall.

The prime minister told lawmakers, on Tuesday, that he had also received a two-page document from the Director of the National Emergency Management Organisation, raising some practical issues.

“I wanted to draw attention to the house that the scientists are asking for us to give consideration to reducing the level from orange to yellow, but with a set of considerations to deal with whatever are the existing risks,” Gonsalves said.

“So I just want to make that joint because there is often some people if you say this, they say, ‘Why you want to reduce the level? You want to send people back and you are not ready.’

“Clearly that is not the case. The reduction of the level has to do with the level of the seismic activity. There are other considerations clearly; it’s how we are cleaning up and how we are restoring conditions satisfactory for life and living and with all the services, etc., etc., but I draw this very important request by the seismic research centre for our consideration,” the prime minister said.

In her letter, Joseph said that seismic activity at the volcano has steadily declined since the last explosion on April 22.

The average daily number of earthquakes being recorded decreased from 354 up to April 22 to 13 up to May 22, and 24 during the following month.

The alert level was lowered to Orange on May 6 and since then, the pattern of declining activity has been maintained.

The letter said that despite the declining activity levels, the volcano continues in a state of unrest as evidenced by the background level of seismicity and sulphur dioxide emission which has, for over a month, established a flux of less than 500 tonnes per day.

There are near surface hotspots observed in the summit crater and a small deformation signal on the continuous GPS station at Fancy.

During the period of heavy rainfall, extensive steaming from lahars is observed on valleys on the western flank of the volcano.

In some valleys, this extends to the coastline and an audible sound often accompanies the lahars.

Lahars have also been occurring in valleys on the eastern side of the volcano but these are often not accompanied by steaming.

The letter said that the occurrence of lahars have become more frequent since the start of the rainy season and there are localised areas of vigorous steam venting that occurs in some valleys, which are accompanied by sulphurous gas emission and remobilisation of ash.

High-resolution photos and videos of the summit crater taken by helicopter reconnaissance during the week of June 21 have confirmed that there is no new lahar dome inside the crater.

Joseph said that over the next few weeks, on-going work to restore monitoring capacity lost during the eruption will continue with the preparation for the installation of additional stations at Greiggs mountain and Fitz Hughes.

A new seismic station will also be installed at upper Waterloo and options for restoration of the Owia station are being explored.

“These extremely sensitive devices can detect small angular changes along the side of the volcano,” Joseph said, adding that the restoration of a summit station was about 90% complete.

The station is equipped with a seismometer, a continuous GPS receiver and a high resolution bullet camera.

Joseph said that the activity at La Soufriere was consistent with a period of unrest following eruptive magmatic activity, and can continue for week or for months.

In addition, there are ongoing hazards associated with the presence of hot degassing near surface magma at the summit.

These include possible phreatic explosions in the summit crater as water interacts with the hot rocks, along with ongoing lahars, which, in some cases, may be hot on the lower flanks of the volcano.

There is also a small but not insignificant possibility that magmatic activity might restart with little warning should there be an influx of new magma from depth.