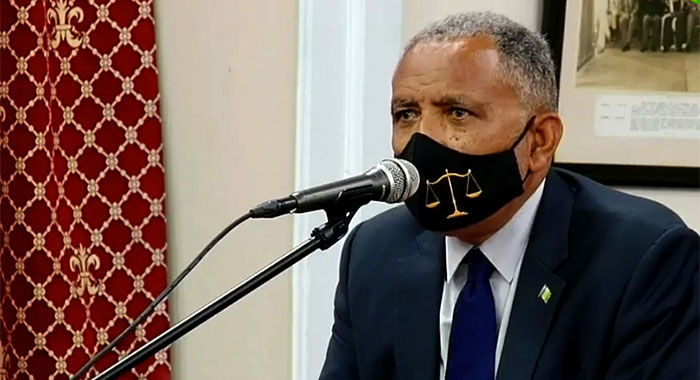 The opposition New Democratic Party has distanced itself from what Prime Minister Ralph Gonsalves said were suggestions by its supporters that assassination of leaders who stay in power too long is acceptable.

“… that is an abhorrent act; it is not one  that the New Democratic Party condones, advocates, or sees in any way as a model for guidance in any actions here or anywhere in the Caribbean or elsewhere,” Opposition Leader Godwin Friday told Parliament on Thursday.

“So any attempt to try and suggest that somehow that is an inclination or some position that the NDP may wish to advance is totally false, wrongheaded, and ought to be stopped in this honourable house,” he said.

Friday made his party’s position clear after Gonsalves told lawmakers that a group with which the NDP was associated in organising protests in Kingstown this week, had suggested that he be assassinated.

“… since yesterday and since the death of the Haitian president, there are persons associated with the organization with which the NDP got into bed with in the protest have been posting things online, they have been referred to me, saying that they want a couple of those Haitian — those who did the killing in Haiti must come to deal with the dictator in St. Vincent. In various forms, they had it,” Gonsalves said.

The prime minister said he was on Star Radio – his Unity Labour Party’s radio station — on Wednesday evening “and a text message came in by a person from Mespo who is inside the NDP, who said that what happens in Haiti is what happens to people who want to hold on to power too long.

He said he commented that the person had their facts wrong because the Haitian president Jovenel Moïse was in power for one term.

Moïse, who came to office in 2017, was assassinated around 1 a.m. Wednesday at his private residence in Port-au-Prince.

“Of course, he was ruling by decree with all the confusion to the next election,” Gonsalves said, adding, “And CARICOM has made statements about these things.

“And I said, this lady in question, she may not like me but I want her to know I love her very much. We may disagree. And this issue of promoting violence, there are members of my family were concerned about me leaving today to come to the Parliament because of what was being said on Facebook and the internet and what intelligence was also picked up by the police and transmitted to me.

“And I simply said nobody intimidates me and I am OK. When I said early that I am on the mountaintop watching it, I am watching it with clarity. And none of these things faze me.”

The prime minister said that when he left Parliament on Tuesday and drove through the protest, “it wasn’t just that persons pounded on the vehicle when I drive through. It was a small group of people; I wasn’t going to let that intimidate me –not at this stage in my life.  And somebody, they threw water bottle. One of them was thrown on the windscreen. I wasn’t sure what it was first until I was told afterwards…”

2 replies on “NDP distances itself from alleged assassination suggestion”