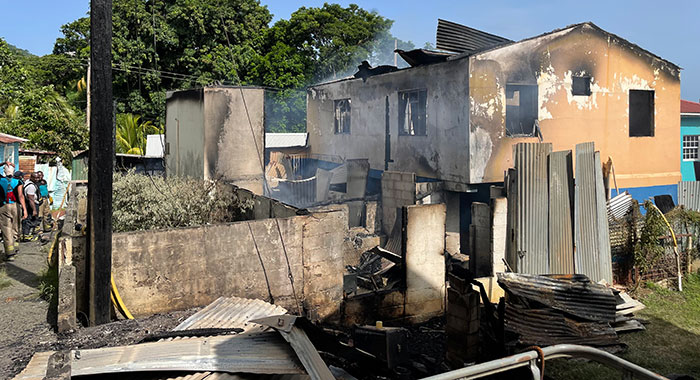 The aftermath of the fire at Block 2000, Old Montrose. (iWN photo)

Police are investigating a fire  at Block 2000, Old Montrose, which destroyed two buildings and damaged two others on Tuesday.

About 12:10 p.m. Tuesday, the Fire Department (Kingstown) responded to an emergency call about a fire in progress at Block 2000.

When the fire officers arrived on the scene, the fire was in its fully developed stage, had destroyed one building and was spreading rapidly to other nearby buildings.

The fire officers commenced operations by using water from their fire appliances and were able to extinguish the fire.

Members of the community also assisted with buckets and garden hoses.

After the fire was brought under control, an assessment of the damage revealed that two buildings were destroyed: a 10 x 10 foot wooden house owned by Earl Frederick, and a 25 x 16 fod wooden building owned by the St. Vincent and the Grenadines (SVG) Seventh Day Adventist Mission.

The other two buildings that were damaged are the Maranatha Seventh Day Adventist Church, and the 32 x 48 foot first floor of a two storey concrete structure owned by Exrod Herbert.

The cause of the fire is unknown.

Meanwhile, “Ballie” Arrington, who lived in the house belonging to Hurbert, told iWitness News at the scene that he left home around 5:30 a.m. and went to a painting job. About 12:30 p.m., he received a call saying that the property was on fire.

“When I get there I behold a small building between here and the Seventh-day Church drop in (collapsed),” Arrington told iWitness News.

He said that it seemed to him that the fire had started there and spread to the buildings on both sides.

Arrington said that a man in the area was occupying the building.

The other building that was destroyed was a house that had been vacant since the last tenants moved out.

The ground floor of the building, which is a carpentry shop, was untouched by the fire.

One reply on “Fire investigation continues”