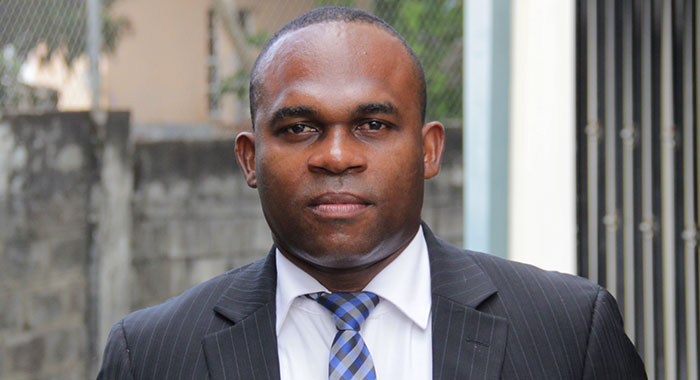 Prosecutor Renrick Cato said it was better to be safe than sorry. (iWN file photo)

A prosecutor this week asked the court to send a strong message to men who abuse their partners or their children.

Prosecutor Sergeant Renrick Cato made the call at the Serious Offences Court on Monday when Chief Magistrate Rechanne Browne asked him if he had any representation on sentencing of an abusive husband and father.

Cato said it is sickening when a woman has to resort to coming before an open court to seek redress against a violent husband.

He, however, noted that the extant case involved a wife and children who had been assaulted, and in one case, wounded.

The prosecutor said that Porter’s explanation that he was drunk was unacceptable.

He said that after Porter had assaulted the members of her family with his hands, “you believe hands are not enough, you gone for cutlass.

“What was your intention when you gone for a cutlass?”

The prosecutor noted that Porter had kicked his wife in the stomach, causing her to urinate on herself.

This, he said, spoke to the extent of the blow that Mr. Porter had delivered.

The prosecutor said that as he entered the courtroom, he heard Mrs. Porter saying that she had forgiven her husband. “‘I forgive you’, but tears were coming from her eyes.”

Cato also noted that Porter’s 14-year-old daughter was hiding behind her younger sister when they, along with their mother, appeared before the court.

At this point, Porter said that his older daughter has always been shy.

Cato noted that Porter’s daughter had gone to the assistance of their mother and he responded by slapping one of them on both sides of her face.

“Who he ain’t kicked, he chopped,” Cato said, adding that in making the report to the police, Mrs. Porter said that she was fed up with her husband’s abuse and could not bear it anymore.

The prosecutor said that the court should send a strong message to all abusers of women and children and those contemplating such action.

He said that message should be so strong as to cause other people to think twice about abusing women – be it their wives or girlfriends — and children.

“The court ought to assist in putting a stop to the commission of these offences,” Cato said.

“There is only one way and it is to send a message so that people will not think about it. These offences warrant a custodial sentence so that the offender get time to sit in prison and reflect, ‘Why am I here?’…”

The prosecutor noted that at the summary level, assault occasioning actual bodily harm carries a maximum sentence of five years in prison, and wounding, a maximum of seven.

He noted that Porter pleaded guilty at the first opportunity and gave an explanation that he was drunk at the time.

“It tells me when he gets drunk he is a force to be reckoned with. I hope that after this sentence, he will stop drinking alcohol.

‘Wine is a mocker’

Before handing down her sentence, the chief magistrate told Porter that there is a saying, “Wine is a mocker, strong drink is raging; and whosoever is deceived thereby is not wise.”

She said that there is another saying, “be not drunk with wine, wherein is excess”.

Browne noted that Porter had alleged that it was after the incident that he learned what had he had done.

She pointed out that Porter had pushed his wife and punched her in the abdomen, the same abdomen that cushioned the children born to him.

Browne further noted that Mr. Porter had swung his cutlass at and chased after his children, one of which had to jump through a window.

It was the grace of God that the cutlass had not more seriously injured the child, she said.

The chief magistrate said that the consequences of Mr. Porter’s offence are serious, noting that he and his wife have been estranged for 24 months.

She said that the fear was evident among the complainants when they appeared before the court.

The chief magistrate told Porter that he is for this family, protector and provider, but “not of licks and slaps and boxes”.

She further noted that the incident involved a cutlass and that all complainants had to seek medical attention.

Browne said the aggravating features of the case are the great disparity in ages of Porter and his children and the vulnerability of the victims.

She said that the two girls who appeared before the court are of very slender build and if their size is any indication, their 9-year-old brother is also slender.

Browne said there was breach of trust and the victims should not expect this type of treatment, even if they were living in the same house.

The chief magistrate emphasised that the incident occurred in the complainants’ home, which should be a place of serenity and peace.

She said there were no mitigating features and added eight months to the starting sentence.

She said that as regards the offender, he had displayed absolutely no remorse.

Browne said while Porter had said he was drunk, during mitigation, when asked if he had anything to say, he said under his breath why the court would want to take him away from his child and a critical stage in their life and that they would be vexed with the court.

Porter was sentenced to 19 months in prison.