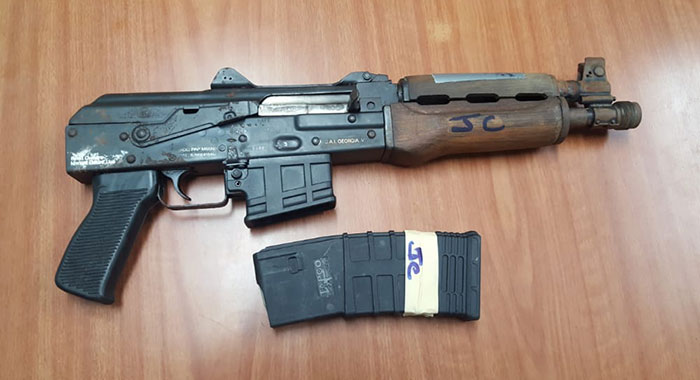 The AK-47 rifle found on the boat.

It might be something for all seafarers to consider: dump all illegal items when making a distress call.

And, two Penniston men learned this the hard way after an AK-47 rifle  — a prohibited weapon, 67 rounds of 5.56 ammunition, and 1,632 grammes of cannabis were found in a boat after it was towed to Mustique on Tuesday.

Police said that officers working at the Mustique Police Station responded to a distress call by a vessel that was stranded at sea.

Security personnel on the island towed the boat to the Mustique wharf.

Police made enquiries and conducted a search on the occupants and the vessel, which resulted in the discovery of one 5.56 Zastava Serbia (AK47 pistol) along with 67 rounds of 5.56 ammunition, and 1,632 grammes (3.6 lbs) of cannabis.

As a result, Parsons was charged with having a prohibited firearm in his possession without the authorization of the minister and possession of 67 rounds of 5.56 ammunition without a license issued under the firearms act.

Both men appeared before the Serious Offences Court, on Wednesday, and pleaded guilty.

Both sentences would run concurrently.

Barker was fined EC$1,530 for possession of a controlled drug, to be paid by Aug. 31 or be sentenced to 5 months in prison.

He was further fined EC$1,800 for drug trafficking to be paid by the same date or be sentenced to 6 months in prison.