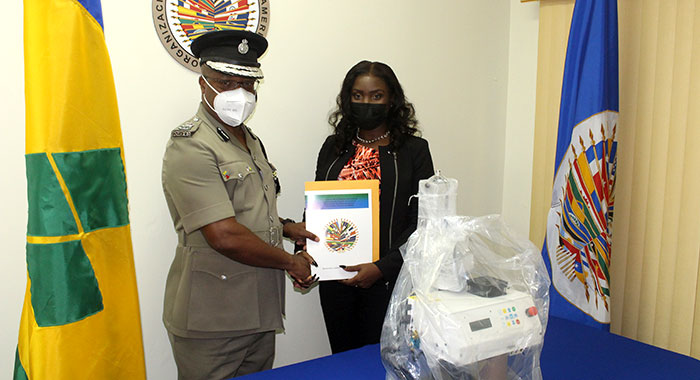 The Organization of American States (OAS) has donated KwikMark marking machine for small and light firearms to the Royal St. Vincent and the Grenadines Police Force (RSVGPF).

Diana Browne, administrative assistant at the OAS office in Kingstown, handed over the machine to Commissioner of Police Colin John this week.

The donation was done on behalf of the general secretariat of the OAS.

Browne explained that the firearms marking machine was being donated under a special OAS programme called “Comprehensive Action against Small Arms and Light Weapons” which is part of the project “Countering the Illicit Proliferation and Trafficking of Small Arms, Light Weapons and Ammunition, and their impact in Latin America and the Caribbean”.

“Today’s donation demonstrates the commitment of the OAS and the General Secretariat to support and strengthen all member states’ capacities in different areas, especially — public security and firearms,” she said.

Meanwhile, John, on receiving the equipment, thanked the OAS on behalf of the members of the RSVGPF and the government and people of St. Vincent and the Grenadines (SVG) for the timely donation.

The commissioner noted that security is at the center of the OAS’s mandate thus, the firearms marking machine will significantly enhance the RSVGPF’s capability in the tracing and fight against trafficking in small and light weapons.

John said that the equipment does not only help to prevent crime, but it can lead to the successful prosecution of offenders.

The commissioner lauded the contribution of the OAS to SVG.

“This is not the first time the OAS has come to our assistance. They have always been a partner to the region and to St. Vincent and the Grenadines as a whole. And we look forward to the continued friendship, cooperation and support so we can make the region a safer place,” he said.

2 replies on “Police force gets firearms machine from OAS”