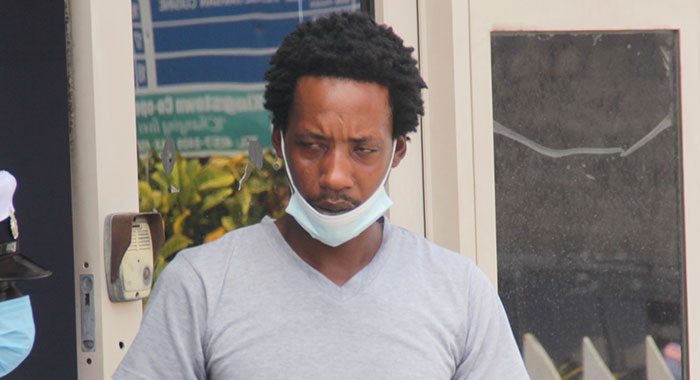 A Sion Hill man was, on Monday, ordered to pay compensation and a fine on a charge that he damaged a door at the Milton Cato Memorial Hospital, causing the glass therein to break.

Zimroy Joseph, 28, a watchman employed by the Kingstown Town Board, pleaded with the court to give him two days to pay the sums, which Chief Magistrate Rechanne Browne had ordered be paid forthwith — if he were to avoid prison time.

He had pleaded guilty to a charge that on Sunday, July 18, at Kingstown, he damaged one 32” wood and glass door.

The facts of the matter, read by Corporal of Police Atnell Ash, are that Seth Isaacs, a medical doctor, was on duty at the Accident and Emergency Department of Milton Cato Memorial Hospital about 7:30 a.m. on July 18 when he noticed that two men had brought the defendant to the hospital.

Joseph had what appeared to be injuries to right foot.

Isaacs spoke to one Dr. Franklyn and asked her to assist the defendant, who was in the waiting area.

Dr. Franklyn did so and, after assessing Joseph, told him to hold on. The defendant became angry and began cursing loudly.

He then left the waiting area and went to the emergency entrance and began pounding on the door with his hands. While doing so, the glass broke.

The matter was reported to the Criminal Investigation Department and Corporal 507 Patrick and other personnel from that department responded.

Joseph was taken into custody and cautioned and interviewed in the presence of PC 1068 Patterson.

He volunteered a statement in writing in which he admitted to the offence.

After reviewing Joseph’s criminal record, the chief magistrate observed that the defendant has a history of that sort of behaviour.

“You have to cut it out,” she said, adding that the man’s offences show a disregard for property and person.

“You are being attended to at the hospital. The job of a doctor is not easy. Persons are sick and dying,” she told Joseph adding that he was being attended to but was told to hold on. Browne further noted to Joseph that he is an employee of the Kingstown Town Board and was destroying property.

“You have to control your temper,” she said.

The chief magistrate ordered Joseph to pay compensation the sum of EC$176.65 forthwith or go to prison for two weeks. She further fined him EC$600 forthwith or one month in prison.

“You have to learn to behave yourself. This was totally unnecessary,” Browne said.

After waiting in the prisoners’ seating area for several hours, Joseph begged the court to allow him two days to pay the amount, saying he had to report to work that night.

The chief magistrate told him that he had to pay at least the compensation amount.

Joseph left the courtroom sometime after, having paid a portion of the amounts.