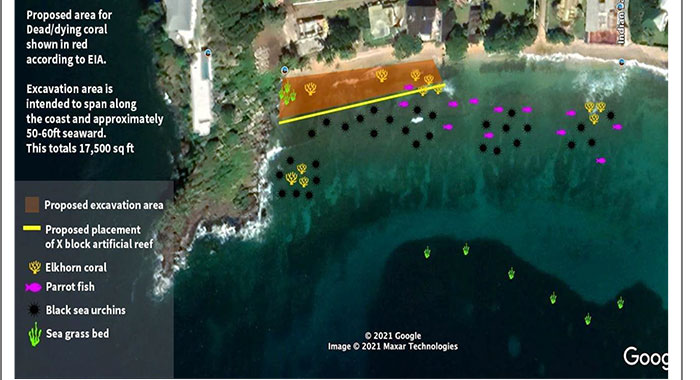 A Nadia Huggins illustration of the development area.

Prime Minister Ralph Gonsalves says that physical planning authorities will use “scientific assessments” as the basis for its decision regarding an application to remove a “dead” coral reef at Indian Bay.

Investor Raffique Dunbar is asking to be allowed to remove a “dead/ dying” coral reef 350 feet along the coast and 50-60 feet outwards into the sea and to replace it with a new artificial reef at about 100-150 feet from the shore. Further, he is seeking permission to deposit imported sand in the area to increase the width of the beach.

The application has generated some opposition, with the St. Vincent and the Grenadines Environment Fund (SVGEF) collecting 4,163 signatures of people who oppose the move.

The prime minister, speaking on the state-owned NBC Radio, on Wednesday, said the application also includes the construction of a jetty, and noted the opposition to it, including a call by some for the matter to be highlighted in the international media.

He said that the Physical Planning Department will review the application in relation to the relevant laws and make a determination based on scientific assessments.

“This is a civilised country, we are a nation of laws. It is very good that people are environmentally conscious and people are more so than ever. But that is why we have a whole set of laws, and, in this particular case, the planning laws, dealing with certain things,” the prime minister said.

“These investors have a right under the planning laws to make an application to the physical planning authority.”

He said that in keeping with the law, the physical planning authority published a notice in the newspaper and invited members of the public to comment or object.

“And people are making objections,” the prime minister said.

“And I use the word ‘advise’ there in a specific legal meaning. They will make a decision on the basis of all the scientific assessments. You don’t start by cursing the investor and abusing them. They have made an application. You don’t start to pre-judge the thing,” Gonsalves said.

The prime minister said he was informed that some expatriates were threatening to write to the New York Times and the Miami Herald.

“You think a letter to Miami Herald or campaigning with the New York Times going put pressure on the planning authorities? All they want to do is to try to prejudge and issue in advance. Let the institutions work. And, for heaven’s sake, don’t verbally abuse or curse the investors. We will know when all the scientific studies are done and when all the assessments are done, what is the decision of the planning authorities.”

He said that only two or three out 15 people on the board are appointed by the Cabinet.

Those appointed by the Cabinet include the chair and deputy chair.

“The rest are all professionals — chief surveyor, chief engineer, chief surveyor … public officials. The chief physical planner is secretary to the board; she is also on the committee…” Gonsalves said.

“Just let the institutions do its work. There is a legal framework. By all means, be as robust as you want to be in your objection, but in your robustness, please stop short of cursing and verbally abusing people and defaming people.”