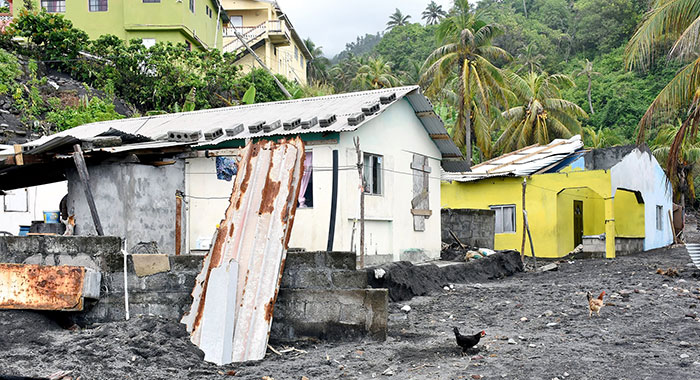 The number of homes in North Windward damaged by the volcanic eruption and Hurricane Elsa is more extensive than what meets the eye, opposition Senator Shevern John said on Tuesday.

She said that while the collapsed roofs and walls are quite noticeable, in some instances, one only sees the damage after entering the house.

The senator told a virtual public meeting of the New Democratic Party, on Tuesday, more people would need assistance than the government might think.

“I have had my share of it. I have been into houses also where the rafters have broken because of the weight of the ash, where the house roofs have caved in, where there are big cracks in the houses,” John said.

“And as I said, we see some, and if you are not allowed into the homes of others, we don’t see it.

“However, those that we don’t see, I classify them as disasters in the making. It, therefore, means that all houses are to be assessed. When you are sending out workers for assessments, you should not only send out workers to assess those that caved in.”

She said that every home in North Windward has experienced some form of damage.

“So I am saying tonight that the government should ensure that all homes are assessed and that help should be given to everyone in the community to ensure that their houses and their livelihoods are better when resettlement takes pace. We need that form of representation.”

She said that electrical inspection is taking place and those that are damaged homes will fail in the inspection process.

This means that some homes have to be rewired.

“Remember this is not what we budgeted for. Additional expense is what we are going to incur there. We never had the money in the first place because most persons in the rural area have been unemployed or they are working for wages that are way below the poverty wage, therefore, it means that the government must help everyone whose homes need to be rewired,” she said.

One reply on “Damage to N. Windward homes more extensive than it appears — senator”