Changes to vaccination law is ‘a sinister move’ — unions’ lawyer 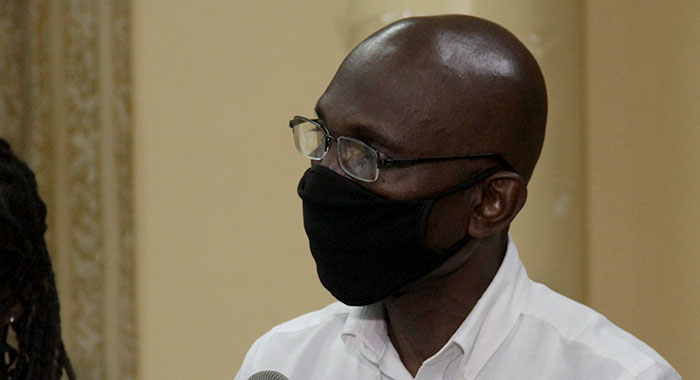 A lawyer for the two main public sector unions in St. Vincent and the Grenadines has described as “a sinister move” the proposed changes to the Public Health Act to address the question of mandatory COVID-19 vaccination of some categories of workers.

Jomo Thomas said, on Tuesday, that the proposed changes to the Public Health Act, to be debated in Parliament, tomorrow (Thursday) is “probably one of the most significant pieces of legislation that will come before the house of assembly.

“All of us should pay close attention, read and come to a conclusion; discussion it with our friends, discuss it with our colleagues,” he further told a joint press conference of the Public Service Union, the SVG Teachers’ Union and the Police Welfare Association (PWA) called to address the issue.

Thomas said that the existing act made an exemption for children, but the amendment proposes to delete that protection.

He pointed out that in Britain, which he noted has many more scientists and research institutions than SVG, the government has said that it was not yet sure that COVID-19 vaccines are suitable for children.

“Yet when we see what I perceive to be a very sinister move to remove that protection in the current act, it tells me that the government is probably thinking and may very well force our children to undergo vaccination unless people make a strong roar to say not my child,” Thomas said.

“So that’s something that I think citizens, across the board, have to pay attention to.”

Israel Bruce, who is the PWA’s lawyer and an opposition senator, said that if Parliament approves the amendment, any relevant persons seeking exemption from it must get the approval from the Chief Medical Officer, in addition to any physician expressing the view that the person should be exempted.

Thomas noted that the proposed changes to the law seek to remove the word “voluntary” as it relates to the vaccination programme.

He noted that in February 2021, Cabinet passed a statutory rule and order that inserted the word “voluntary” as it relates to the vaccination programme.

“Now this government will have to say to us what has happened in the last six months that necessitates it removing the word ‘voluntary ‘from the immunisation programme,” Thomas said.

He said that he knows that Prime Minister Ralph Gonsalves has said that common law and statutory law allow for employers to provide a safe and healthy workplace.

The lawyer further noted that Gonsalves recently said that the law currently allows for mandatory vaccination.

“That is a very broad, expansive reading of that law. Because what that law says is that the minister, in confronting a particular emergency, may have a whole series of things he or she may do, including an immunisation and vaccination programme.”

Thomas, however, emphasised that all of the things that the Public Health Act — which dates back to 1977 — allows, each has to “come back to the constitutional mandate.

He said that the government repeatedly states that the Constitution allows for exceptions to the rights it guarantees citizens, once that exception is reasonable.

“Of course, there are exceptions to these constitutional dictates but reasonableness is not an arbitrary term. It is a term that has very tight strictures and you cannot just willy-nilly say that this is arbitrary or this is not arbitrary. And not only that, a lot of the time you hear him talking about this is in keeping or this is in response to a pandemic.”

He acknowledged that a pandemic has been declared.

“The question has to be in looking at what is reasonably necessary and proportionate, what is the country-specific reality in establishing reasonableness or necessity.

“Because just as in economics one size doesn’t fit all, it’s the same thing that holds in health. So those are the hurdles, those are the legal constitutional hurdles that this government would have to go over:  reasonableness, necessity and proportionality.”

Thomas said there is the issue of the constitutional rights of the people where the government seems to be saying, based on what has been extracted from the law, that citizens only have one right.

“They took out this thing about religious rights and the prime minister came back and say if you are going to establish religious rights in good faith. But you are taking it out of the act.”

The lawyer accused the prime minister of “genuflecting to the religious sector of our society” in his public comments.

“So those are the things that I think we need to flag,” Thomas said.

He said that there is something “even more sinister” in the removal of the section that makes the vaccination programme voluntary.

“When you remove the word voluntary, it is really, in essence, giving carte blanche, giving the private sector to do what the government may not be able to do across the board.

“So, you may recall a few weeks ago, about five or six weeks ago, on the Issue at Hand programme, the prime minister publicly declared to one of the major private sector persons in this country … — he literally tell them what to do: make sure you give the notice, make sure you do this, make sure you do that.  And more than that, if you need more, I will go back to parliament and make sure it is done. And that is what he is doing now, by the removal of the word voluntary.”

Thomas asked how this is in keeping with good governance best practices.