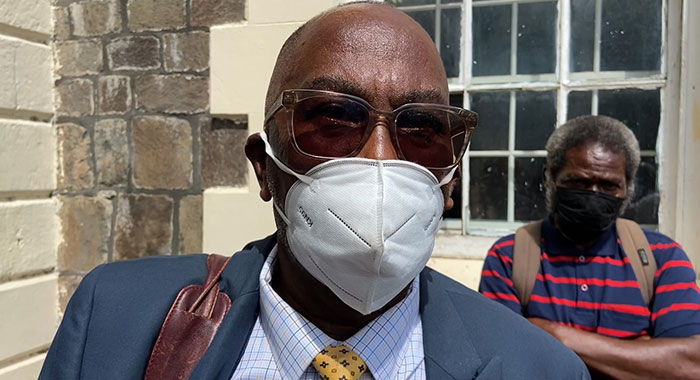 Gonsalves, who turns 75 on Sunday, was flown to Barbados Thursday night for further medical attention after being struck in the head by an object, allegedly thrown by a protester, near Parliament around 5:15 p.m.

Leacock told Parliament that he learned of the prime minister’s injury when Deputy Prime Minister Montgomery Daniel spoke about it in the national assembly.

“… I do not take kindly to the physical injury to the prime minister. But as firmly as I address that regret, that remorse and all of the sincerity, I am saying to you, if I was the commissioner of police today in St. Vincent and the Grenadines, I would not have allowed my prime minister, or the prime minister, to alight his vehicle at the point of the Coreas Trading, where there is an angry crowd, and to walk outside of his vehicle, where he is sheltered and protected, through that crowd into the Parliament building,” said Leacock, who has a military background.

“I leave that on its own, but to say it is an irresponsibility and a misjudgement.”

Leacock, who is a vice-president of the opposition New Democratic Party (NDP), joined with Opposition Leader Godwin Friday, the party’s president, to express “regrets” about the incident.

The Central Kingstown MP referred to an incident a decade ago, when opposition lawmakers were physically removed from Parliament.

“… my own colleague, Honourable Daniel Cummings [, MP for West Kingstown,] is still in Trinidad trying to recover from injury to his neck and his back and his arm as a consequence of physical actions, being thrown out of this Parliament by the police when we had similar situation not unlike what happened recently,” Leacock said of the incident in March 2011.

He said that he does not believe that the life of any protester, police officer, or politician “is worth a protest on the street of St. Vincent and the Grenadines, no matter how well meaning they are.

“And protests, even of a robust nature, are a part of our democracy. We have to accept that.”

Leacock, however, said it is “easy to appear to be disingenuous, to listen to comments that denounce protest.

“I belong to a political party whose life was cut short by two and a half years because St. Vincent literally came to a point of civil unrest,” he said of the protest of 2000, which forced the NDP to call an early general election, which the Unity Labour Party won in March 2001.

Leacock said that at the time of the protest two decades ago, he was a member of the Auxiliary Police Force and president of the Chamber of Industry and Commerce.

He explained that he was a member of the delegation that participated in the talks in Grenada, which resulted in the Grand Beach Accord, in which early elections in SVG were agreed.

“In fact, out of that is the roles that were defined for our Christian Council, that speaks to elections and speaks to occasions of disturbance, specifically,” Leacock said.

“I don’t point fingers but we may well see the Christian Council come to life in accordance with the Grand Beach Accord, since, in fact, on the streets today, in the protests, are calls from the St. Vincent Teachers’ Union, a very respected trade union in this country, which, for very many years, supported the government regime, and in fact, were in the vanguard of the 2000-2001 demonstrations on the streets in Kingstown.”

He noted that other workers-rights bodies, including the Nurses Association, participated in Thursday’s protest.

“I have witnessed, in this very Parliament yard, the governor general being shaken up in his car. I have had the experience of not being able to walk from the Coreas building to the union house, the Public Service Union right there, on the threat of life. I have been through that,” Leacock said, referring to the political unrest at the turn of the century.

“I have been in the prison compound when it was set afire with [former MPs] Ken Boyea and Girlyn Miguel at the time to bring order to St. Vincent and the Grenadines when prisoners were on the roof of the prisons, mattresses set alight and Kingstown was being burnt.

“So I know of violence first hand, and it is disingenuous for the Unity Labour Party to lay claim and objection. In fact, they repeatedly celebrate in this country what they call the ‘roadblock revolution’ when children were born in the streets in St. Vincent, when ambulances couldn’t get to the hospital. So we can go on and on and on, because there is enough blame to be shared,” Leacock said.

The Central Kingstown MP, speaking later in the meeting, after another animated intervention by Finance Minister Camillo Gonsalves, who is also the prime minister’s son, said:

“I actually don’t have to check, because I know this as a fact, but I will double check when I get home to ensure that I really born here and as the calypsonian said, nobody going run me.”

Leacock was, apparently, referring to the fact that the finance minister was born in the United States.

“Me father bury in the cemetery down Bottom Town and my mother in the Anglican Church Yard.  Nobody ain’t running me.”

He said that he was standing by the comments he had made about the prime minister’s injury.

“If I was the commissioner of police, I would not allow a prime minister to alight his vehicle and walk through a protesting crowd to the Parliament house,” Leacock reiterated.

He said that his statement is no different from the sentiments expressed by Deputy Prime Minister Montgomery Daniel, who told Parliament that he prevented the prime minister and his security detail from going back to the crowd after the prime minister was injured.

“…That correct action by him avoided more mayhem on the streets of Kingstown and possibly more injuries to many people at this time,” Leacock said of Daniel’s comments.

“So I don’t have to back away. I think carefully about what I said. The commissioner was irresponsible to allow the prime minister to walk through a protesting crowd. End of story,” he said.