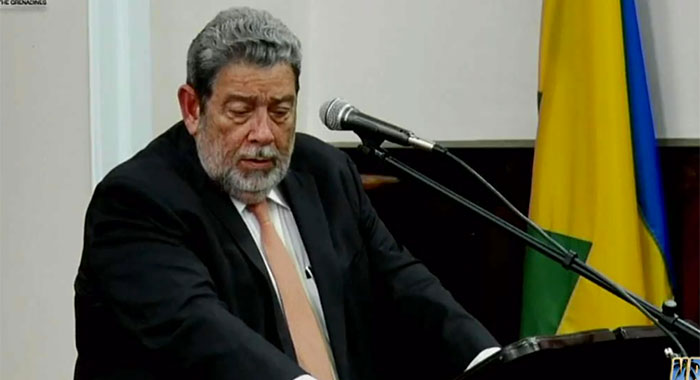 Prime Minister Ralph Gonsalves is expected to return to St. Vincent on Saturday from Barbados where he went Thursday night for further medical attention after being struck in the head during a protest in Kingstown.

Deputy Prime Minister Montgomery Daniel told NBC Radio, on Friday, that Gonsalves, who turns 75 on Sunday, received “a fairly severe wound” and medical personnel advised that he travel to Barbados for an MRI “immediately”.

He left Thursday night for Barbados and was undergoing the magnetic resonance imaging Daniel said in a call to the state-owned radio station.

“My understanding, equally, is that there will be a second reflection on the tests and so on that he is to do. And he may probably not be back in St. Vincent until tomorrow. I think that is where we are in relation to Prime Minister Gonsalves, in terms of his health, as to what transpired yesterday,” Daniel said.

“Of course, as I said, we are alive and well and the prime minister is alive but not so well. And so, the country of St. Vincent and the Grenadines is a blessed country and life will go on as usual.”

“Unfortunately, you may have one or two persons who may step out of line. But, of course, they, on their own reflection, stepping out of line, would always reconsider what they … have done and knowing what they have done was wrong would seek to have reconciliation. But, life goes on, the work goes on.”

The deputy prime minister noted that Parliament completed its agenda, with the meeting continuing “fairly late”.

The meeting was suspended shortly after 3 a.m. on Friday.

“And so this is only to say to you that even in the absence of the prime minister that the work of the country goes on and at the moment, of course, I am at the helm,” Daniel said, adding that the Cabinet was slated to meet Friday morning.

“So the work continues and, yes, there are those of us we feel very saddened as to what has happened, but we have to continue to uplift this country. This country is one that as we all know, as I said, is blessed country and we will get around, we will get over this and move on and we will do that speedily. “The prime minister comes back tomorrow so we look forward to his return tomorrow,” the deputy prime minister said.

4 replies on “PM Gonsalves to return home on Saturday”