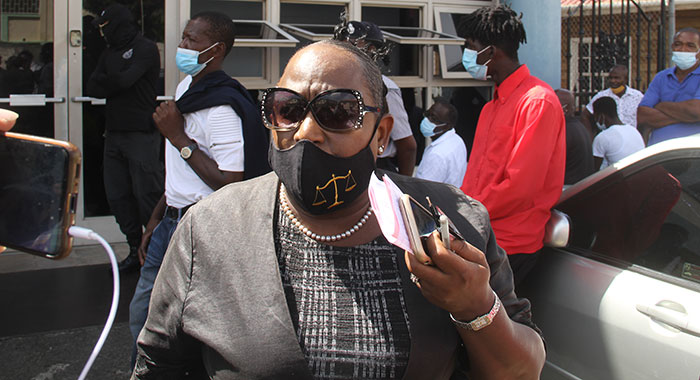 A lawyer says that she will sue the state on behalf of three alleged victims of police brutality, including a man who was reportedly denied medical attention for hours after he was allegedly wounded by a police baton.

Kay Bacchus-Baptiste told an opposition New Democratic Party press conference on Saturday that her client, John Mofford, was injured when he was struck in the head with a police baton last Thursday.

She noted that her client was injured on the same day that Prime Minister Ralph Gonsalves was injured when he was struck in the head as he walked through protesters outside Parliament.

“His head bled, he was taken to the hospital bleeding and he was chased away from the hospital,” Bacchus-Baptiste said of her client.

“He had to go there three times before he could get medical attention. John Mofford was at the hospital or should have been at the same time that Ralph Gonsalves was there but the police chased him away.

“You know when John Mofford got medical attention? He had to go back in the evening and was there all night until 6 a.m. the next day. He had his head stitched, three stitches.”

The lawyer said there are videos circulating showing who struck Mofford.

“It is alleged it is a female police officer, and that’s another lawsuit. I say this to show that these are persons who were in a peaceful riot but were abused, assaulted by the police who are paid by police servants to serve and protect all citizens of St. Vincent and the Grenadines,” Bacchus-Baptiste said.

Bacchus-Baptiste said she would also file a lawsuit on behalf of suspended prison officer and opposition activist, Kenson King.

“Everybody saw that video with police pushing, chucking, hitting Kenson King over and over in his chest,” she said in apparent reference to a video widely circulated via social media a few weeks ago.

“Kenson just dropped his hands and did nothing. That is the one that police went armed to his house this afternoon. A man who the people saw take blows from the police,” she said, referring to a raid that police conducted at King’s home Saturday afternoon.

Bacchus-Baptiste was speaking at a press conference called to bring attention to police raids of the homes of opposition supporters and people believed to be close to the NDP, looking for illegal guns and ammunition, electronic devices, and documents.

The lawyer said she had written to the commissioner of police and copied the letter to the attorney general telling them, clearly, that she has a medical report to show that King was injured and seeking compensation.

“They have not responded yet, so that’s another lawsuit that is coming,” Bacchus-Baptiste said.

She said that Ken Findlay, another of her clients, alleged that he was assaulted by a senior, who she identified by name.

Bacchus-Baptiste said that the officer hit her client in his chest “hard”.

“In fact, when I went to see him at the station, his chest was hurting him,” the lawyer said.

She said that Findlay was kept in custody for the night and when she went back to the precinct the following day, she spoke with a senior traffic officer as Findlay was alleged to have committed a traffic offence by sitting in his van in the protest.

Bacchus-Baptiste, however, said that Findlay’s van could not move because there was a vehicle in front and another behind it.

She said that her client was eventually released.

3 replies on “Lawyer to file lawsuits over alleged police brutality”