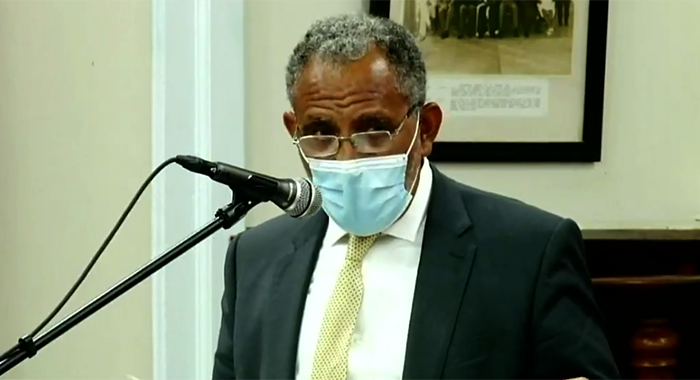 Opposition Leader Godwin Friday has rejected attempts to blame him personally for the injury that prime minister Ralph Gonsalves suffered as he walked through a protest in progress in Kingstown on Thursday.

“… I deny, I reject that,” he said at a New Democratic Party press conference on Saturday.

Some members of the government and their supporters have blamed Friday for the incident, which has resulted in a wounding charge being brought against a Layou woman.

Annamay Lewis, 56, a vendor, pleaded not guilty, on Monday, at the Kingstown Magistrate’s Court, to a charge that last Thursday, she wounded the prime minister.

Lewis was granted EC$3,000 bail and is scheduled to reappear in court on Sept. 15 for trial.

“That is absolutely scapegoating in an attempt to – the perception, of course, is that I am the person who is the greatest political threat so, therefore, they would seek to damage my reputation and to smear me with these kinds of allegations, which are absolutely false,” Friday said.

“Everybody who has known me in my life in politics and even before then would know that I would never encourage, never advocate, never condone and would reject out of hand any act of violence against anybody, including Ralph Gonsalves.

“It doesn’t advance the cause of the New Democratic Party; it doesn’t advance my cause. Why would I encourage it? So I categorically reject that and anybody logically looking at it would know that that’s the case.”

Gonsalves was struck in the head around 5:15 p.m. as he walked through a crowd of protesters who had gathered in the capital to demonstrate against his government’s move to make COVID-19 vaccines mandatory for front line workers.

The government went ahead and passed the law despite the protest, which involved the NDP, Teachers’ Union, Public Service Union, Nurses’ Association, and RISE Hairouna.