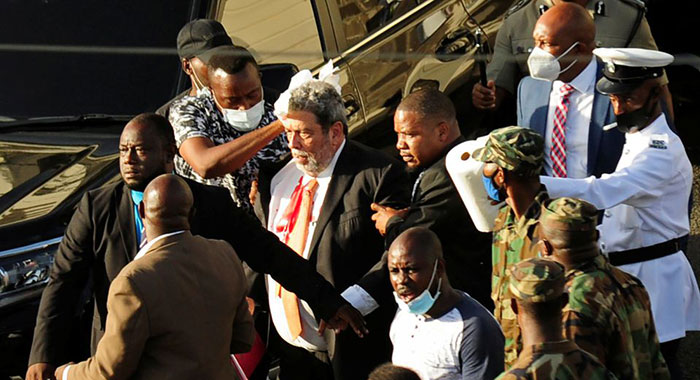 Prime Minister Ralph Gonsalves, his shirt covered in blood, after being injured in protest in Kingstown on Thursday. (Photo: REUTERS/Robertson S. Henry)

KINGSTOWN, St. Vincent, (CMC) — Prime Minister Ralph Gonsalves Wednesday said both common law and statue laws allow for a Member of Parliament to have the right of “unhindered access” to, and egress from, Parliament and its precincts.

“I for one will never allow the crazies and their fellow-travellers to hinder or impede my access to Parliament.  I will walk again, as I did on August 5th, if needs be.  And let the silly ones blame the victim in his exercise of his rights,” Gonsalves added.

In a statement, Gonsalves, who suffered an injury last Thursday when supporters of the New Development Party (NDP) and two public sector trade unions, staged a protest outside the Parliament building against plans by his government to have front line workers vaccinated against COVID-19, said two pieces of legislation addresses the issue of unhindered access to Parliament by legislators.

He said the Public Order Act and the House of Assembly Privileges, Powers and Immunities Act create “criminal offences punishable by fines and imprisonment in important particulars of contemporary relevance given the unlawful wounding of the Prime Minister and other egregious examples of illegal conduct by several protesters…”

Gonsalves said the current Public Order Act first came into effect in 1951 and was subsequently amended on nine occasions, the last being in 1987 under the NDP administration.

“Among other things, the Public Order Act, in Section 5 thereof, requires that any person organising or concerned with organising any public meeting (which includes a protest gathering) or public procession, to notify the Commissioner of Police at least 24 hours before the meeting or procession of certain relevant particulars.

“Any organiser and any person who knowingly takes part in any such meeting or procession is guilty of an offence punishable by a fine of up to EC$1,500 and imprisonment for three months.”

Gonsalves said that he has been advised that no notification, as required by law, was tendered to the commissioner of police in respect of the meeting and procession of last Thursday.

He said, further, Sections 10, 11, and 12 of the Public Order Act creates offences, punishable by fines and imprisonment for organisers and participants in a public meeting or procession who refuse to obey the orders of a police officer to disperse if a meeting or procession for which notification was or was not tendered, is held within a radius of 200 yards from any point within the curtilage of the Court House or Parliament building at any time when the House of Assembly is sitting.

“I have been advised that sections of the protesters were ordered to disperse on August 5, 2021, but they disobeyed. They surely did not disperse when the Prime Minister sought to exercise his lawful right to attend Parliament,” Gonsalves said in his statement.

According to the legislation, a “stranger”  means “any person other than a member or an officer of the House”.

Gonsalves said that under this legislation, a person is guilty of an offence and liable to a fine of EC$1,500 and to imprisonment for six months.

“There is ample video and direct, personal evidence of dozens of participants in the meeting/procession on August 5, 2021, who, prima facie, breached one or other of the provisions” of the Act, he added.

Gonsalves, who had to be flown to Barbados for medical treatment as a result of the injury suffered during the protest, said that there are several other statutory provisions which touch and concern the unlawful conduct of several protesters last Thursday outside the immediate perimeter of the Parliament building.

He said these pieces of legislation make reference to obstructing a police officer, throwing missile, disorderly conduct as well as abusive, indecent, insulting, profane or threatening language and conspiracy, attempt and assisting offenders.

He said that the penalties may vary.

Gonsalves said that being a legislator for more than 27 years, “I have never known of a single case of a Member of Parliament being hindered in going to or coming from the House of Assembly by any protester.

He said that on more than one occasion since he was elected prime minister, he has been able to “walk through protesters without physical harm or injury” until last Thursday.

“To be sure, there has been boisterous picong at times, but no physical injury or threats.  I believe that the general ‘good behaviour’ of protesters have caused successive Commissioners of Police to do ‘Police-Lite’, that is, policing with a light touch.

“Demonisation of individual politicians and the promotion of violence and ‘bad behaviour’ are new features of a ‘crazy wing’ of, or associated with, the NDP has become emboldened over the years after December 2015.”

Gonsalves said that the weak leadership of the NDP has resulted in the metaphoric tail wagging the dog, with dangerous consequences.

“Surely, this foolishness, violence, and wanton lawlessness must stop. In this regard, the police and all law-abiding citizens must ‘put their foot down’.”