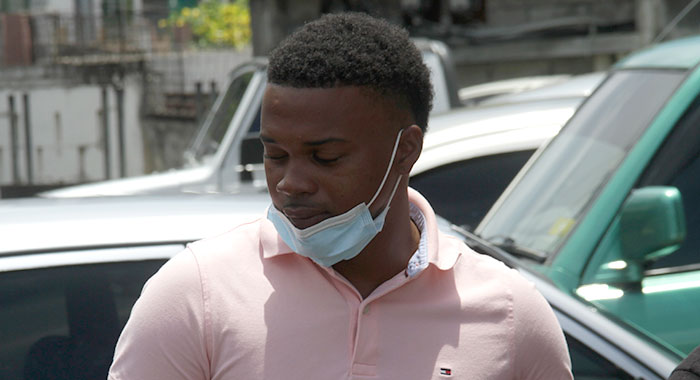 Senior Magistrate Rickie Burnett will, on Monday, hand down his sentence on former national footballer, Myron Samuel, for possession of an unlicensed firearm and 15 rounds of ammunition.

On Wednesday, at the Kingstown Magistrate’s Court, Samuel’s lawyer, Grant Connell argued that his client should not be sent to prison, as doing so would amount to a death sentence.

He said that the 28-year-old shopkeeper is suffering from avascular necrosis  — a disease that results from the temporary or permanent loss of blood supply to the bone — and is trying to raise US$12,000 to travel to Cuba for medical attention.

Firearm as treatment for injury?

However, Police Sergeant Renrick Cato, a prosecutor, told the court that he had never known possession of a firearm to be a treatment for an injury.

Cato, who was not prosecuting the matter, had risen towards the end of the submission by his colleague, prosecutor Police Sergeant Cornelius Tittle, regarding whether suspended sentences are applicable in firearm cases.

Cato said that the firearm, when loaded is heavy, and asked where on his body Samuel intended to carry it.

“In the same waist?” Cato asked.

He said that the court must look at the public interest in the case and send a strong message to persons who are in possession of unlicensed firearms or ammunition or those who intend to do so.

Earlier, Tittle had reasoned that there was no medical evidence before the court to definitively indicate that Samuel’s condition would automatically deteriorate should be sentenced to prison.

Samuel, a Layou resident, changed his plea on two of the three charges, and the third was withdrawn.

He told the court he was guilty of charges that on June 17, at Layou, he had in his possession one Glock 22 pistol, serial number LNL 144, and 15 rounds of .40 ammunition without a license under the Firearms Act.

In presenting the facts, Tittle told the court that police were investigating the theft of three Glock pistols and one M4 rifle from the Georgetown Police Station.

He said that acting on information, detectives Sergeant 740 Duncan and Corporal 240 James went with a search warrant to Samuel’s house, where the firearm, loaded with the ammunition, was recovered.

In mitigation, Connell noted to the court that Samuel has no previous conviction and pleaded guilty to the charges. He said that the defendant has a 7-year-old daughter and expressed extreme remorse for his actions.

The lawyer pointed out that Samuel is “a son of the soil” and former national footballer, who, from a very early age, was spotted as one of the “potential greats” for St. Vincent and the Grenadines (SVG).

He listed the various levels as that which Samuel played the sport, locally, regionally and internationally, from as young as 9, noting that, at 15, he became “the youngest ever member of the national football team”, and was declared the most outstanding player in several tournaments

Samuel further played semi- and professional football in the United States. As the captain of the SVG national team, the former striker has heard, many times, the roar of the Arnos Vale Sports Complex when he beat many defenders and scored.

The lawyer indicated that he had presented several documents to the court as part of the mitigation, adding that one was a “very detailed” social inquiry report prepared by Camille McIntosh.

Samuel attended the Layou Government and Campden Park Secondary schools and saw football as the vehicle to achieve whatever he could in life.

The report also indicates that Samuel suffers from a disease that caused him to stop playing football, the lawyer said, adding that the injury is detailed in the medical report provided to the court.

He said that the documents also include the results of a 2016 CT scan as well as a report from a hospital in Cuba, where efforts were made for Samuel to travel to address “the disease”.

Since 2018, Samuel has been experiencing excruciating pain and to ease this, he has, on his own, procured the painkillers and medication needed for some level of comfort.

That soon exhausted his finances and efforts to seek the assistance of the SVG Football Federation proved futile at times, the lawyer said.

Samuel’s efforts to have “the authorities to assist have borne some fruits, but not for him to enjoy it”.

At this point, the senior magistrate told the lawyer that he did not want to speculate and asked him what he meant by “higher authorities”.

The lawyer said authorities that are higher than the SVGFF.

‘Not one ill report’ about defendant

Connell submitted that when the four pillars of sentencing are considered, the court should arrive at a non-custodial sentence, adding that the aggravating features of the offence are that the firearm was illegally obtained and Samuel had no license.

He, however, said that given the defendants “present condition and his inability to run”, Samuel, who has a shop, had applied for a firearm permit.

Samuel had recently received threats, and being a shopkeeper, coupled with the threats, justified his application for a permit.

The lawyer said that contrary to what the prosecution said in the facts, Samuel handed over the firearm to the police and had not even unwrapped it, hence it being loaded.

“Fortunately, and surprisingly, the police were at this home within minutes of his being there,” Connell said.

The lawyer argued that there were no aggravating features of the defendant, adding that there had been “not one ill report” about Samuel.

He said that Samuel is committed to the young people of Layou, and despite his “disease and excruciating pain” still tries to coach young footballers and encourage them to go into sport, to one day represent SVG “for what it is worth”.

The lawyer told the court that one of the documents he had presented was a psychiatric report.

He said he found it “somewhat disturbing” that in order to get a psychiatric report from the Mental Health Centre, there has to be a court order, or a request from the chief medical officer.

Since the offence, Samuel has been attending counseling and had participated in four sessions so far, Connell said.

He cited the case of Kenroy Robinson, who the Serious Offences Court ordered to pay a fine of EC$10,000 in two days or serve three years in jail for firearm possession.

The fine was imposed because Robinson had a heart condition, Connell said.

“Behind those walls, Myron Samuel simply will not survive,” Connell said, adding that there were not adequate facilities in prison to treat him and they did not even exist outside the prison in SVG.

He said that the objective of sentencing was not to destroy someone although Samuel’s acquisition of the firearm was a “stupid act”.

Connell, however, said that Samuel had, many times in his football career, chosen to play for SVG rather than make money

“I’ll quote what he said. He said he put loyalty over money. He returned here to give of himself.”

The lawyer asked the court to consider a fine for his client, but said that a fine should not be harsh.

“Whatever he is able to put together is to save his life,” Connell said, adding that Samuel meets most of the criteria for a suspended sentence.

In his submission on sentencing, Tittle told the court that an issue was whether Samuel’s medical condition puts him in a situation where he is unable to serve a custodial sentence.

He said that according to the sentencing guideline — which the court is obligated to follow – those types of offences automatically begin with a custodial sentence.

The prosecutor said that the guidelines dictate that the court is only to divert from them in exceptional circumstances, hence, another issue was whether Samuel’s case was exceptional.

Tittle further noted that the medical information before the court was that Samuel was suffering from a condition.

He, however, said that the information did not say whether, as a result of that condition, Samuel would be unable to serve a prison sentence, and whether the condition would automatically deteriorate as a result of imprisonment.

Tittle told the court that Samuel’s offence is extremely serious, adding that firearm and firearm-related offences are a real issue in SVG.

He said that the lawyer had said that Samuel had claimed that he had been threatened, but there was no indication that those alleged threats were reported to the police.

He said that acquiring an unlicensed firearm should not have been Samuel’s first option to defend himself, nor was it the only means through which he could protect himself.

The prosecutor said that he could not, and would be insensitive to, close his eyes to the fact that Samuel has served the country, adding that it was commendable to see young people moving in that direction.

“But he took a complete U-turn when he decided he wanted an unlicensed firearm,” the prosecutor said.

Tittle further emphasised that the firearm was stolen from a police station, a point on which the defence counsel objected, saying that his client was not before the court on such a charge.

He said that unlike in the case of Robinson, it was unclear that a prison sentence would have direct negative consequences for Samuel’s health.

The prosecutor also responded to the defence claim that the firearm was handed over voluntarily.

He said a voluntary surrender was when someone goes to the police and hands over a firearm.

Tittle noted that Samuel handed over the firearm during a police raid.

The magistrate allowed bail to continue until the sentencing.

One reply on “Ex-footballer changes pleas on gun charges; sentencing on Monday”