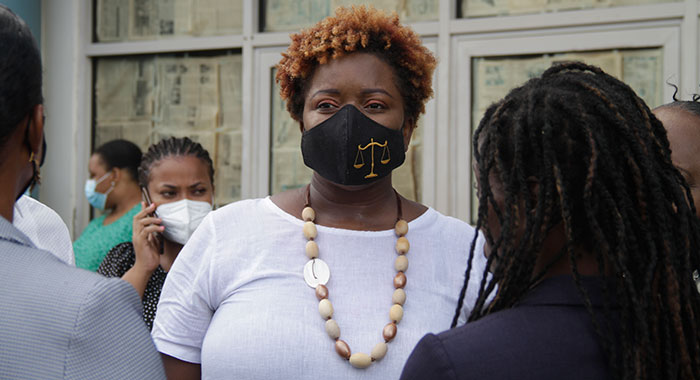 Opposition activists Adriana King, a 41-year-old teacher, of Belmont, and her cousin, Kenson King, a 34-year-old prison officer, of Park Hill, on Monday each pleaded not guilty to four counts of breaching the public order.

They were both separately charged that on July 29, about 9:30 a.m., in Kingstown, they organise or were concerned in organising a public procession/meeting without notifying the Commissioner of Police at least 24 hours before the procession.

Another charge was that on the same date and place, they took part in a public procession in contravention of Section 5 (1) of the Public Order Act, Chapter 396 of the Revised Edition of the Laws of St. Vincent and the Grenadines, 2009.

The third charge was that they organised or were concerned in organising a public procession/protest on Aug. 5, about 9:30 a.m., in Kingstown, without notifying the Commissioner of Police at least 24 hours before the procession.

The fourth charge that they took part in a public procession in contravention of Section 5, sub section (1) of the Public Order Act Chapter 396 of the Revised Edition of the Laws of St. Vincent and the Grenadines, 2009.

The duo entered the not guilty pleas on all charges when they were arraigned before Senior Magistrate Rickie Burnett at the Kingstown Magistrate’s Court.

Bacchus-Baptiste raised with the court a question about the phrasing of the charges of organising or being concerned with organising a protest/protest procession as it relates to Adriana.

She told the court that the copy of the charge given to her client was different from the ones read in court and asked to be given copies of the one that was actually put to her client.

The duo has secured bail before their release from police custody on Sunday and the magistrate allowed this bail to continue.

They were each arrested Friday afternoon and spent the weekend in police lock up before the misdemeanour charges were brought against them.

Bacchus-Baptiste asked for disclosure and prosecutor Sergeant of Police Cornelius Tittle said that the prosecution could facilitate this in two weeks.

The court ordered disclosure by Sept. 10 and adjourned the matters to Nov. 17 for trial.

The accused are activists on behalf of the main opposition New Democratic Party (NDP).

Among the persons who attended Monday’s hearing was Opposition Leader Godwin Friday, who is also president of the NDP.

There was unusually heavy police presence outside the court as the duo was arraigned.