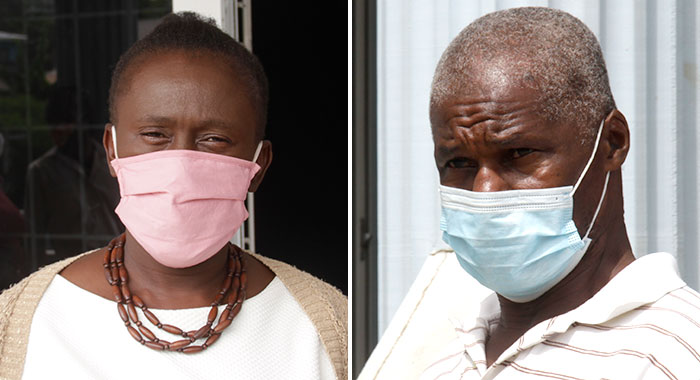 Nicole John, left, and her husband, Cornelius John, outside the Biabou Magistrate’s Court, sitting in Calliaqua, on Friday. (iWN photos)

Nicole John, the wife of shooting victim and threatening language accused, Cornelius John, told the court, on Friday, that she does not wish to proceed against her husband.

This mean that Mr. John would only have to face the threatening language charge in which Senator Ashelle Morgan is the virtual complainant.

Mrs. John told the Biabou Magistrate’s Court, sitting in Calliaqua, that she had come to the decision of her own free will, adding “and sound mind”.

Mr. John made national headlines in April when news broke that he was shot at his Diamond home when three persons came there sometime after 6 p.m. on April 13.

Mr. John was alleged to have threatened his wife by saying “would chop off my neck, sacrifice my head and blood to the devil with me and my children” and “you want me to get a machine gun and kill you and your grandchildren and children and take alyo out”.

On Friday, Director of Public Prosecution Sejilla McDowall told the that she wished to addressed two of the three matters against Mr. John and, as such, asked the Mrs. John be called.

Mrs. John then went on oath and told the court that she did not want to proceed against her husband.

As it relates to the charge in which Morgan is the virtual complainant, McDowall told the court that the Office of the Director of Public Prosecutions intents to have the matter conducted by a prosecutor who is not within the jurisdiction.

Meanwhile, Morgan and Nelson are to be tried together at the Mesopotamia Magistrate’s Court.

The next hearing is slated for Aug. 27.

Mr. John is represented by Kay Bacchus-Baptiste, Nelson by Ronald Marks, and Morgan by Duane Daniel.

In May, iWitness News asked Mrs. John if she and her husband had had any confrontation on April 13.

Mrs John said, “Actually, not to my knowing. That’s all I have to say.”