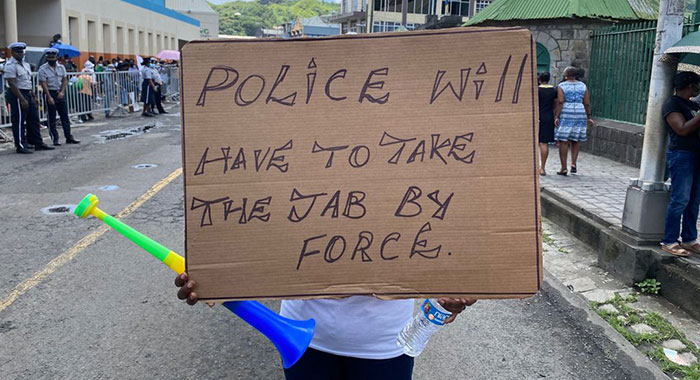 A placard outside Parliament Parliament, on Aug. 5. Police officers will soon have to be vaccinated to remain in their jobs. (iWN Photo)

Healthcare workers, police officers, prison officers, seaport and airport employees, including customs and immigration will be the first set of frontline workers who will be required to be vaccinated or leave their jobs.

Prime Minister Ralph Gonsalves said, on Wednesday, that one of the “big issues” for Cabinet discussion that day was finalising the Public Health, Public Bodies Special Measures Rules.

The rules have been drawn up under the amendment to the Public Health Act, passed in Parliament on Aug. 5, without opposition support, and hours after Gonsalves was injured as he walked among protesters demonstrating against the changes to the law.

“They (frontline workers) have a choice. It is perfectly legal; it is perfectly within the four walls of the Constitution and what we are doing, you have a choice, you either do it; if you don’t want to do it, you work elsewhere,” Gonsalves said, referring to the vaccine mandate.

He, however, maintained that the policy and accompanying law is “not mandatory vaccination”.

“In this case, it’s a free and democratic world. In the interest of public health, frontline workers — it’s happening all over the world — you are asked to take the vaccine.

The prime minister said he had heard people say that the law is against their personal liberty.

He, however, noted that section 3 of the constitution, which speaks to personal liberty, says, “No person shall be deprived of his personal liberty save as may be authorised by law in any of the following cases, that is to say,  for the purpose of preventing the spread of an infectious or contagious disease …”

The prime minister said that some constitutions are not “that specific” on the issue.

He said that in several other sections about freedoms, the nation’s supreme law says that freedoms can always be limited “if the limitation is reasonably required in the interest of public health being one of them, public safety being another and it is reasonably justifiable in a democratic society.

“Nobody is saying that somebody going hold them down and jook (jab) them with a vaccine,” the prime minister continued.

“Nobody is saying that. That would not be justifiable in a democratic society. But the courts have held that the vaccination in relation to COVID, all over the world, perfectly in order. All the common law jurisdictions.”

The prime minister, who is also minister of legal affairs, said that Section 13 of the Constitution, which speaks to protection from discrimination on the grounds of race, etc., says it is not discrimination to require a standard or qualification for a particular job.

“Presumably, they will challenge it in the courts, and that’s perfectly in order.”

He said that non-frontline workers, where the job does not require vaccination, employees will be required to take a COVID-19 test every two weeks.

“And, the way it is done, ‘An employee who, without reasonable excuse, fails to comply with rule 4 or 5 [that is either the vaccination of the test, as the case may be, depending on the category of worker] must not enter the workplace and is to be treated as absent from work’,” the prime minister said, reading from the document to be presented to Cabinet.

“So if you turn up, you wouldn’t have anything to do. Nobody will give you anything to do and the regulation will say you can turn up but you will be absent from work.”

The rule will further say that a public officer who is absent from work under this sub rule or who enters a workplace in contravention of this sub rule commits an act of misconduct and is liable to be disciplined in accordance with the Public Service Commission Regulation.

In relation to other workers, for example those at airports and seaports who are not public officers, the relevant laws or customs will apply.

He said that the regulations will have a lifespan only for the period of the public health emergency.

“When the minister issues an order that says that the public health emergency is at an end, well that will be the end of that. We go back to normal.”

Gonsalves said that on Tuesday he had a discussion with the Chamber of Industry and Commerce “and they are quite supportive of what we are doing and they themselves are interested in making sure that the vaccine or testing, as the case may be, for their workers, that this be dealt with in a similar manner”.

The prime minister reiterated that 193 countries that are members of the United Nations, despite their various political philosophies, “if is one thing on which they agree is that the vaccine is an important tool in the toolbox to fight COVID for us to get back to normalcy.

“I am quite clear on this thing that I have to believe in the science and the spirit. I can’t run a government on the basis of conspiracy theories or fanciful doctrines, or, in some cases, superstitions. I can’t do that.”

The prime minister said that he knows that there is vaccine hesitancy “because you have a lot of misinformation which is out there”.

“And the truth be told, if you could get away with not having the jab or have something put up your nose for a test – I don’t like it going up my nose,” he said, adding that, having taken about 30 PCR tests, “I find, the vaccine easier than having the swab going up me nostril.

He said that a lot of untruths have been spoken about the amended Public Health Act and Medical Officers’ Act.

“If you are an Anglican or a Catholic or a Methodist, for instance, or even a Pentecostal, they don’t have as part of their theology, an anti-vax position.  So if you come as a Catholic or Anglican, for instance or any of those religions, and you say your belief, well you can say so, but I mean…”

The prime minister said that the government will give a notification period for people to get themselves in order and then the Office of the chief medical officer or the medical officer of health would announce the batches for vaccination or test, as the case may be.