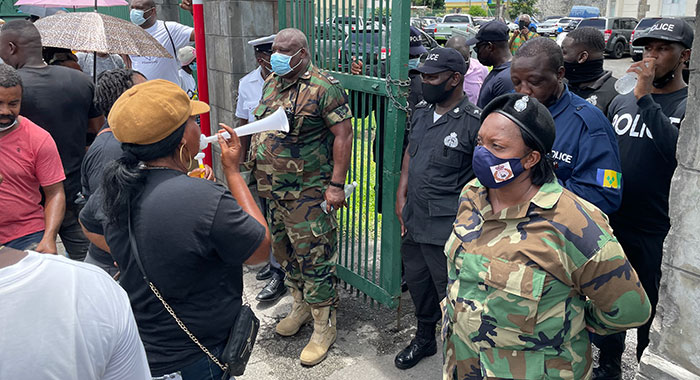 Police officers and protesters outside. the Parliament compound on Aug. 5.

The opposition New Democratic Party says that its discussions with Commissioner of Police Colin John and other members of his high command about protest in St. Vincent and the Grenadines were “constructive and cordial”.

The talks, held last week at John’s invitation, recognised the role of protest in a democracy, and the obligation of the police to protect protesters, Opposition Leader and NDP President Godwin Friday told the media on Wednesday.

He gave the update as he invited the public to join a protest planned for Kingstown on Sept. 9, when Parliament is scheduled to meet.

The planned demonstration will be the latest in a series of protests in Kingstown geared at highlighting a number of national issues.

The most recent demonstration, held on Aug. 5, was against changes to the Public Health Law, mandating COVID-19 vaccination for certain “front line” workers.

But those protests turned violent, with demonstrators hurling missiles at Prime Minister Ralph Gonsalves, one of which struck him in the head, resulting in him seeking medical attention in Barbados.

Also, that same day, at least two protesters were injured when police struck them in their heads with truncheons.

At Wednesday’s press briefing, Friday assured the public that the opposition has been doing all it can “to ensure that your democratic rights are not unduly restricted”.

He said that the police chief invited the NDP to discuss “aspects of the Public Order Act that they were suggesting would be applied to further protests”.

At the meeting, the police chief was joined by three members of his senior command, and Friday, along with NDP Vice-President and Central Kingstown MP, St. Clair Leacock, as well as lawyer and former senator, Kay Bacchus-Baptiste represented the NDP.

“It was a very constructive and cordial meeting,” Friday said.

“Our objective was to assert the right to protest as a fundamental democratic right that could not be negated by the application of ordinary law, which the police were seeking to apply.

“And we continued to insist upon that and since the matter may be adjudicated before the court soon, the commissioner said that’s all he would say about it at that point; he didn’t want to get into it any further.”

The police chief was apparently referring to the charges that have been brought against opposition activists, cousins Adriana King and Kenson King, in relation to the last two protests in Kingstown.

“But, in that meeting, there was a common understanding that our people have a constitutional right to protest. What we need to do now is to articulate and put into practice how we go forward in exercising those rights.”

During the press conference, Friday quoted extensively from ““Protest and Human Rights: Standards on the Rights Involved in Social Protest and the Obligations to Guide the Response of the State”, a 2019 report by the Inter American Commission on Human Rights.

“I have set out, very carefully, the context under which we are supposed to be operating here in this country,” he said.

“It’s all stuff that the people know, that the authorities know, but, so often, find it difficult to apply.”

He said that at the meeting, the NDP “got a common understanding, as well from the commissioner, that the police have a duty to protect all persons involved in protests, and have a specific duty as well, to protect leaders like myself, who are prominent persons in those activities.

“That was a commitment that he understood should be there but it was quite clear in the expression there and was useful and reassuring to some extent. We have to see now how that’s put into practice.”

Friday said that the meeting acknowledged that part of the function of the police is to facilitate the participants in the exercise of their democratic right to demonstrate.

“Notice — as we saw above in the report that I quoted from –when given, will be to facilitate the police in providing assistance to participants in protests and for setting the context for protection of other persons who may be involved. “We also asked about the use of amplified sound and it was acknowledged that such a request would be favourably received because it is understood that it is important for the exercise of control and for communication where the crowd is large,” the opposition leader said.

“I know it’s very difficult to use a bullhorn when there is a large crowd for a long period of time. But this is all part of the recognition that the state authorities must assist persons in the exercise of their democratic right and can’t unduly restrict them.”