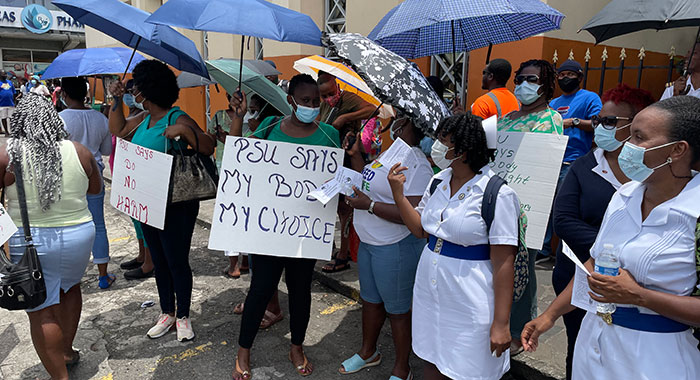 Nurses among protesters outside Parliament, on Aug. 5, 2021. (iWN Photo)

The four days of strike planned by the Public Service Union and nurses in St. Vincent and the Grenadines for next month will not change the government’s policy that mandates COVID-19 vaccine for certain frontline workers, if they are to remain in their jobs.

“Now, I am appealing to the nurses and the doctors; I am appealing to the public servants,” Prime Minister Ralph Gonsalves said on Wednesday, noting that he has read that PSU has the requisite notice under the Essential Services Act that they will withdraw their services from Sept. 7 to 10.

In a press statement on Tuesday, the PSU said that its members voted at an August emergency general meeting to take industrial action Sept. 7 to “in response to the government’s amendment of the Public Health Act.

“Furthermore, at a meeting held with nurses on Wednesday, August 18, 2021, the nurses took the decision to withdraw their services during this same period to protest the amendments which have implications for their fundamental rights and freedom.  The amendments to the Public Health Act will strip the rights of essential workers, in the first instance, to choose to be vaccinated or not,” PSU General Secretary Philip Bailey said in a press statement.

“The government has refused to or failed to listen to workers with respect to their human and constitutional rights and freedoms. In light of this, the PSU has notified the Governor-General of the intention of the withdrawal of service, in keeping with the provision of such action as outlined in the Essential Services Act.

“The PSU is calling on all Public Servants to withdraw their services during the period September 7–10, 2021. We must send a clear message to the government that we will not tolerate any infringements on our rights and freedom,” the release said.

“Now, OK. What is that intended to achieve? That the government is going to change its position?  That you are going to use industrial muscle to defeat right reason and what is in the public interest? That’s what you intend to do?

“I don’t think that … people in the country will consider that to be reasonable.”

The prime minister said he happens to know a lot of farmers and fishers who don’t intend to take the vaccine, saying they cannot catch COVID-19 from or pass it on to their produce or catch.

He said that he is encouraging those fishers and farmers to take the vaccine.

“And I know that is what the vast majority of people in this country would think,” Gonsalves said.

“And they would also think that because policing is such a personal and upfront activity, you would want a policeman arresting you to be vaccinated. The prisoners would want that to happen from the prison officers…

The prime minister said that people would want their taxi driver to be vaccinated.

He noted that Canada is requiring vaccination, but would not treat a person who took the Sputnik jab as being vaccinated.

“The nurses and the doctors in this country know that Ralph, at every turn, has been very good to them. In the case of the nurses, we give a $1,000, $1,200 a month. In the case of the associate degree, we have a free education, the degree itself, it is subsidised and we pay one-third of the price, plus giving you your $1,200 monthly.

“We’re the only people paying you to go to school. And then you could apply and get a tuition scholarship doing our degree…