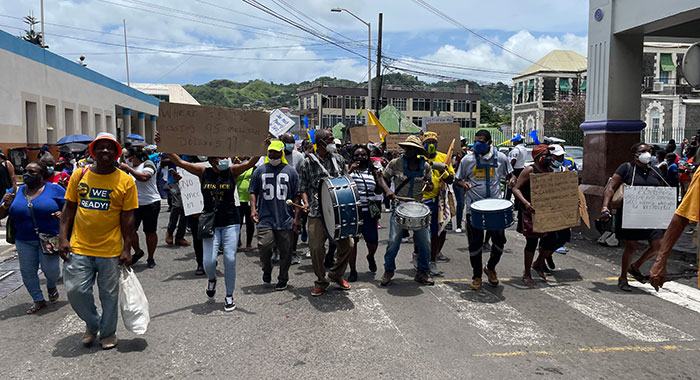 The opposition New Democratic Party has invited the Christian Council to take part in the Sept. 9 protest in Kingstown, having assured the religious leaders that the party is about peaceful protest.

The NDP is inviting the public to take part in the demonstrations against changes to the Public Health Act, passed into law on Aug. 6, hours after Prime Minister Ralph Gonsalves was injured as he walked among protesters in Kingstown.

On Wednesday, Opposition Leader and NDP President, Godwin Friday told the media that members of his party met one week earlier with Christian Council members, Bishop Gerard County of the Catholic Church, Bishop Leopold Friday of the Anglican Church, and the Reverend Adolf Davis  of the Methodist Church.

“And, of course, we invited the members of the council to take part in any next protest action that takes place in Kingstown or elsewhere in the country. And that is an invitation, of course, that we have extended to all members of religious organisations, churches, their congregations and we trust that this will be accepted and that we will have a day of prayer and solidarity on the 9th, in Kingstown.”

The opposition leader said that there have been “many actions on the part of the state, on the part of individuals, which, if they are effective, would silence criticism, would discourage participation of citizenry in direct democracy and will make this place, St. Vincent and the Grenadines, a poorer place to live, a place that we would not feel we have done our best for our children and grandchildren to pass it on to them.

“This is why we all have to stand at some point and say, this time, I am going to stand and be counted.”

He said that while citizens have elected representatives to Parliament, “that doesn’t mean we have given up all our democratic rights to act for ourselves. When it really matters, as it does now, when democracy is clearly under threat in this country, that I will exercise that right myself, I will stand up and say, all differences aside, we must agree that we are a democratic country, that people have a right to come out and peacefully protest; we have set that out here.

Meanwhile, in a statement issued after the Aug. 5 protest, the Christian Council expressed concerns about the injury of the prime minister during the demonstration.

“While our democracy allows for the freedom of expression which derives from our dignity as human person, freedom brings with it responsibility — personal and social.

“The injuring of the PM by one of the crowd demonstrates a certain intolerance of divergent views, opinions and positions,” the statement said.

The council said it continues to “abhor violence and urges those who choose to protest to do so peacefully and responsibly.

“We encourage those who organise protests to make every effort to ensure they are peaceful and ask that all our leaders avoid incendiary language. We are also concerned about the immaturity that has pervaded our society and its politics where the justification of one wrong is another which often leads to both sides of the political divide pointing to the short-comings or previous actions of the other as excuse from responsibility.”

The statement encouraged political leaders “to be clear and unambiguous in discouraging violence and to act responsibly in navigating differences and the leadership they provide in these challenging times”.