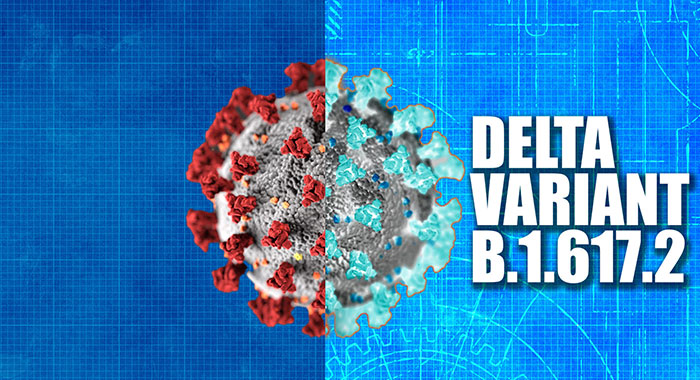 Health officials in St. Vincent and the Grenadines say they are preparing for community spread of the Delta COVID-19 variant, which is more transmissible.

Medical Officer of Health, Dr. Roger Duncan noted at a press conference on Tuesday that SVG has been able to keep its COVID-19 numbers “in a modest way” without curfews and other lockdown measures.

“… the positivity rate is trending upwards,” he said, citing the latest data from the ministry.

“Now, I won’t want us to be too secure or too overconfident in the numbers that we’re seeing in terms of the amount of COVID we have among us.

“We have to be very, very, very wary of what is happening. We don’t have to look very far. There’s Barbados right next door; up north, there is Jamaica; south of us is Grenada and we could see what is happening there,” Duncan said.

He said that what is happening in those countries could take place in St. Vincent and the Grenadines.

“So all the work that we’ve been doing so far is sort of trying to level or flatten this curve. So if we have small numbers, sporadic cases that will keep occurring, then we are going to be able to reduce hospitalisation, severe illness and, hopefully, death.

“But we see what’s happening and … I’m really convinced it’s a matter of time before we encounter possible community spread of the Delta variant and we know it’s much more transmissible than the other variants we’ve encountered.”

Health Ministry statistics say that as of Tuesday, SVG had recorded 2,348 cases of COVID-19 since March 2020.

SVG has confirmed three cases of the Delta variant, all of them among vaccinated travellers to the country.

Duncan said that since the Delta variant is more transmissible, “We know that more likely it would infect more people.

Duncan said that as part of its plan for containing the Delta variant, the Ministry of Health is actively looking for variants.

“You would notice while we do releases regarding Delta cases, you would find that with those releases, we would indicate that these travellers would have entered the country some weeks prior.

“There’s a simple explanation for that, because it takes time to do the typing. We don’t do genetic typing in St. Vincent, so they go off to CARPHA (The Caribbean Public Health Agency, in Trinidad). And they also go off to other public health labs for confirmation.

“So we’re actively looking. So there are several things that we need to do and we’ve been doing.”

He said that people now get their PCR test results in 24 hours.

“So we’ve been building our capacity to test an increase in the turnaround time. Our contact tracing, surveillance, has been improved. And that’s why we’ve been detecting these cases, these imported cases of Delta.

“Also, we have a contingency plan for emergency care, both at the Milton Cato Memorial Hospital and at community and rural hospitals, which would see some deviation from normal daily routine as we switch to a different mode, depending on what the caseloads are, whenever we encounter  a rapid community spread… of the Delta variant,” Duncan said.

He said health officials expect the public to continue to follow the COVID-19 protocols.

“I know quite often people say, ‘Well, look, you know anything happens. People don’t follow the rules. Nothing happens. There’s no enforcement.’

“The message remains the same; simple message, we kept talking about this, it’s heading into two years now:

First of all, you need to keep your hands clean, wash your hands with soap and running water as often as possible. If these are not available, you have the option of sanitisers.

“So keep your hands clean, please keep your distance. Six feet is safest. If you can’t manage six feet in some conditions, at least do not go below three feet. So you need to keep the distance itself.”

4 replies on “SVG preparing for community spread of Delta variant”