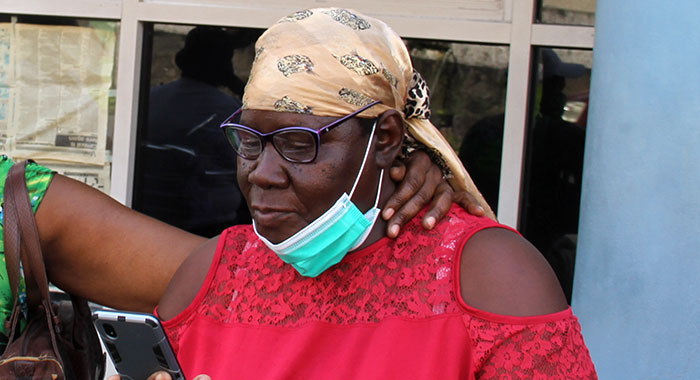 The woman charged with injuring Prime Minister Ralph Gonsalves during the Aug. 5 protest in Kingstown was arrested again, on Tuesday, and later granted station bail after being charged with throwing missiles.

Annamay Lewis, a 56-year-old vendor, of Layou, was arrested at her home and taken to the Criminal Investigations Department in Kingstown, Kay Bacchus-Baptiste, one of her lawyers, told iWitness News.

She is to appear before the Kingstown Magistrate’s Court, on Thursday, to answer the charge.

The new charge comes as the prosecution failed to comply with the court’s order to disclose to the defence, by Aug. 31, the evidence they have against Lewis in connection with the charge that she allegedly wounded the prime minister.

“I think it is playing for time,” Bacchus-Baptiste said.

“I do not believe they have strong evidence, at all, based on what she said to me and the fact that they tried to force a confession out of her, unfairly and untruthfully,” the lawyer further said in connection with the initial charge against her client.

“I can see they are in problems trying to come up with something to see if they can get a confession or something but even that is going to prove problematic, based on my instructions.”

Bacchus-Baptiste said that when she spoke to Commissioner of Police Colin John, on Tuesday, before the new charge was laid, he had said that police wanted to do an electronic interview with Lewis.

Electronic interviews are usually reserved for serious offences such as those that could be tried before a judge and jury.

“But at least it’s not upgraded to an indictable offence because when he spoke about an electronic interview, it led me to believe they are going to try to do that, which would prolong the matter, maybe for a year or two years. But at least, so far, that’s not the situation,” the lawyer said.

Bacchus-Baptiste said she got a call Tuesday morning saying that police were at Lewis’ home to arrest her.

She said she spoke to the lead officer, Corporal Andrews, who told her they were there to take Lewis into custody in relation to the same matter.

“So I said, ‘Why do you have to re-arrest her for that? She is already arrested; she is already before the court and charged. If you want, you can just add a charge.’”

She said she told Lewis to go along with the officers and asked counsel Israel Bruce, another member of Lewis’ legal team, to go to the CID, where police did a non-electronic interview with Lewis.

Bacchus-Baptiste said that the officers asked her client “about the same thing which they asked her about before… Nothing new, no evidence new. The interview ended because she gave no additional evidence”.

The lawyer said she again contacted the police chief who indicated that Lewis would be charged with throwing missiles and bail was opened to her.

She said that the charge of throwing missiles “is another minor thing and which they would not be able to prove that either.

“They could have simply added the charge. They did not need to arrest her and pull her away from her family and bring her back into CID again.  That is definitely overreaching. It is an abuse and you cannot bring somebody in just to have an electronic interview. There is no law that permits that.”

When Lewis was arraigned at the Kingstown Magistrate’s Court, on Aug. 9, on a charge that on Aug. 5, at Kingstown, she unlawfully and maliciously wounded Ralph Gonsalves, of Old Montrose, she was granted EC$3,000 bail with one surety.

Bacchus-Baptiste then requested full disclosure in the matter, and the Director of Public Prosecution Sejilla said McDowall that disclosure “is requisite” and the Crown “will comply as standard”.

The court ordered disclosure by Aug. 31.

“To date, no disclosure, and the case is on the 15th of September. Usually, when there is no disclosure, they come and they ask for an adjournment. If there was ample time, the court can throw the matter out.”

She, however, speculated that the court would not dismiss the charge yet, adding that the Crown “they are going to say, oh they have an additional charge”.