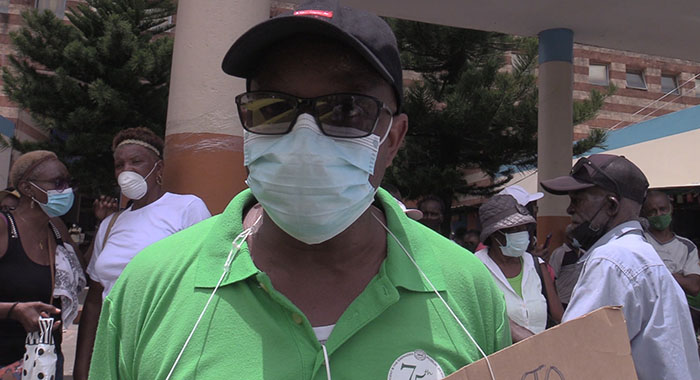 President of the Public Service Union at the protest on Thursday. (iWN photo)

Executive members of the Public Service Union were among public sector workers who boycotted the four-day strike and one-day protest called by the union last week.

On Thursday, when the union protested, in Kingstown, the government’s COVID-19 mandate, some members of the executive reported to work.

The union has not released any data on work attendance during the four days of strike, which ended on Friday.

However, data released by the government show that work attendance in the healthcare sector at which the vaccine mandate points directly, remained high..

In fact, attendance was higher on Thursday, the day of the protest, than the two previous days, the government data show.

Union president, Elroy Boucher told iWitness News at the protest on Thursday that public sector workers who object to mandatory vaccination went to work rather than stand on the picket line.

“There are even executive members who have gone to work simply because, my understanding, they were given a call by persons in the certain authorities” Boucher said.

“But I am saying if we, as Vincentians, have the strength, if we, as Vincentians, are aware of what our fighting spirit should be; if we are Chatoyer’s children, there is nothing that can dissuade us from standing up for our right.”Asked what it says about his leadership if someone outside of his union could call his executive members and influence them to act in a way that he might see as contrary to the interest of the union, Boucher said:

“That really doesn’t say anything negative about my leadership. Because, as you can see, there are executive members on the demonstration line and they have been at the forefront speaking about these issues.”

He said some of the executive members who were at the protest had not been in the leadership of the union for a long time.

“… what we have to understand, and what we in St. Vincent, many of us, are fighting against, is the influence of partisan politics, people being tied to their — our country is seriously divided and my hope is that we get to a point where the impact of that is very minimal and you can only appeal to people’s conscience and their will to fight and see if that can be reviewed.

“It is not a matter of leadership; it is a matter of people standing up on principles. And if they can’t stand on principles, then it’s very sad. It is an indictment on the entire country, because we as a country must not be so divided that we are fearful of standing up in defence of our right or that we refuse to stand because it may make our political party look bad…

“So our people just need to understand that and to regain that fighting spirit. Perhaps 20 years have suppressed it. I don’t know,” he said, in an apparent reference to the length of time that the Unity Labour Party has been in office.

Boucher said that while the turnout at the protest was not what he was expecting, the strike was impactful in some areas.