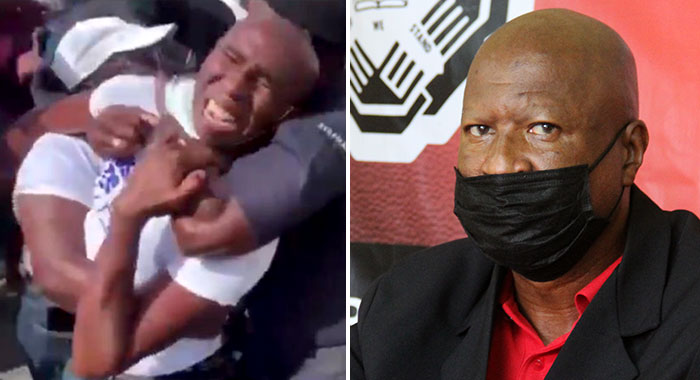 In this composite photo, at left, Carly John is seen in the police choke hold as a police officer tries to free him, and, at right, President of the SVG Teachers’ Union, Oswald Robinson at Monday’s press conference.

The St. Vincent and the Grenadines Teachers’ Union has described as an “attempt to murder” akin to the death of Gorge Floyd in the United States, the chokehold in which a police officer placed the husband of opposition senator Shevorn John last Thursday.

Social media videos and photographs of the incident show the officer holding Carly John in the chokehold briefly during what appears to be a tussle.

A woman appears to be attempting to free Mr. John, who, along with his wife, attended Thursday’s protest, from the officer’s grip.

“The St. Vincent and the Grenadines Teachers’ Union strongly condemns all forms of violence that continue to plague our blessed land St. Vincent and Grenadines,” the Teachers Union President, Oswald Robinson told a press conference on Monday.

“The most recent brutal, heinous and vicious act of violence that was meted out on the husband of Senator Shevorn Lewis-John, on Thursday, the 9th of September 2021 in Kingstown, we condemn that act of violence,” Robinson said.

“This attempt to murder is similar to what took place in the United States sometime last year, I think, on George Floyd. The teachers union calls for swift justice for Mr. Carly John and that the perpetrators be brought swiftly to justice.”

Robinson said that John, a career educator despite the ruling of the court on a 2005 collective agreement between the union and the government, was forced to resign her job after she was not granted election leave last year to contest the general election.

After falling 69 votes shy of unseating five-term MP for North Windward, Montgomery Daniel, John opted to accept a senatorial seat rather than reapply for a teaching post, which has a higher salary, and also has retirement benefits.

Robinson said that the senator is still a member of the Teachers’ Union.

“… and so we are in solidarity with her and her entire family. It was very disheartening to see the scene on social media and our sister there, witnessing this brutal attack on her beloved husband.”