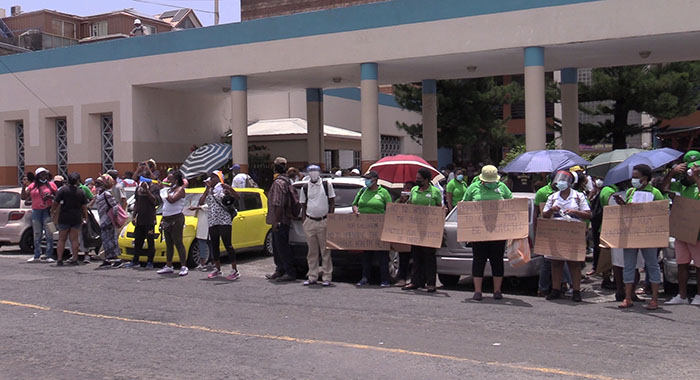 Some of the protesters on the picket line on Thursday. (iWN photo)

Work attendance among public sector healthcare workers last week, during a four-day strike, was highest on Thursday, when their union called out government employees to protest in Kingstown.

In fact, at the maintenance department of the Milton Cato Memorial Hospital, where Elroy Boucher, president of the Public Service Union, works, only one worker besides the trade union leader was absent.

Seven staff members turned up for work while Boucher was on the picket line.

“And it is very interesting to notice the third day of the strike which is the day of the protest that Thursday the 7th was the best of the days in terms of the turnout,” Prime Minister Ralph Gonsalves said on WE FM, on Sunday.

Members of the union voted to withdraw their service over the government’s COVID-19 vaccination policy, which calls for mandatory vaccination of certain categories of frontline workers, including doctors and nurses.

The prime minister thanked, “on behalf of the people of St. Vincent and the Grenadines and my own personal behalf the tremendous turnout by the nurses and the other supporting staff at the medical facilities, health facilities over the four days of the quote unquote, withdrawal of service or strike”.

Gonsalves quoted a communique sent to him by the Ministry of Health, early Friday morning, on the first three days of the strike.

“And I want to repeat by reading what they said here. ‘The Ministry of Health, Wellness and the Environment and most of the management of Hospital Services takes this opportunity to thank the staff of hospitals services, will continue to support and focus on the delivery of health care to the people of St. Vincent and Grenadines.

“‘During the last three days of the industrial action implemented by the PSU, the staff of hospital services demonstrated remarkable strength in support of patient care. The records show that the service areas are adequately covered with the following numbers of nurses and other staff reporting for duty.’”

“And it is very interesting to notice the third day of the strike which is the day of the protest that Thursday the 7th was the best of the days in terms of the turnout.”

The prime minister pointed out that during the other two days of the strike, there was “excellent attendance everywhere except at the maternity, which is up and down really.

Gonsalves said that at that ward, “they have issues, apparently, separate and distinct from anything to do with COVID, with the vaccination.”

He said the issues surround allowances to which maternity ward workers say they are entitled, in light of the specialised nature of their work.

“But the services did not suffer. And I want to thank all of them and I will personally thank them in a different way also.”

The prime minister noted that the union had called for a general strike in the public sector.

He, however, said, there was no fall off of workers.

“And you didn’t have absenteeism above the normal because … on any day, you will have one or two persons from here and there who would be absent for this or that reason.”

He said that there were people on leave who attended work.

“In one case, I understand that one member of the executive has either resigned or said that she was resigning because of the manner in which this whole thing was conducted, because people are just not happy; the members in the union just not happy with the politicisation of their union to carry out a particular political agenda. People don’t like it,” the prime minister said.