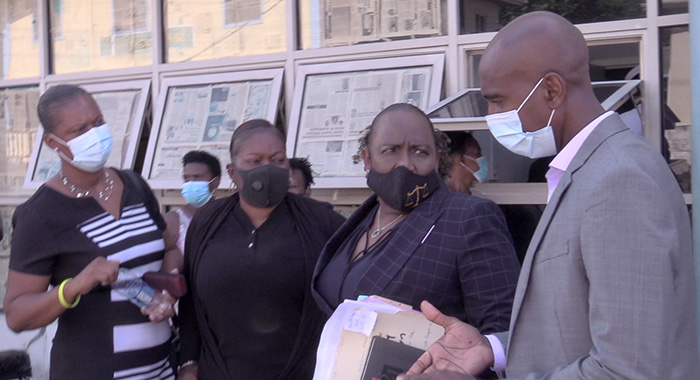 A lawyer for the man who police put in a chokehold during the protest in Kingstown, then charged him with three offences, has questioned why the officer was not charged with attempted murder.

Kay Bacchus-Baptiste told the Kingstown Magistrate’s Court, on Tuesday, after the arraignment of her client, Carly Browne, of Owia, that she had expected to see an attempted murder charge against the officer, said to be Police Constable 700 Verrol Sam.

After making the comment, the lawyer, looking in the direction of the prosecution table, said that her comment was not a joke, adding that she had seen “people smiling”.

She told the court that she will call for an attempted murder charge to be brought against the officer.

Senior Magistrate Rickie Burnett did not comment on the lawyer’s intervention, repeating only the date set for a trial.

John, who is opposition senator, Shevorn John’s husband, as well as Cherry-Ann Caine, who is alleged to have attempted to free him from the chokehold, were arraigned, on Tuesday.

Caine, who was also represented by Bacchus-Baptiste, pleaded not guilty to a charge that on Sept. 9, in Kingstown, she obstructed Sam, he being a police officer acting in the due execution of his duty.