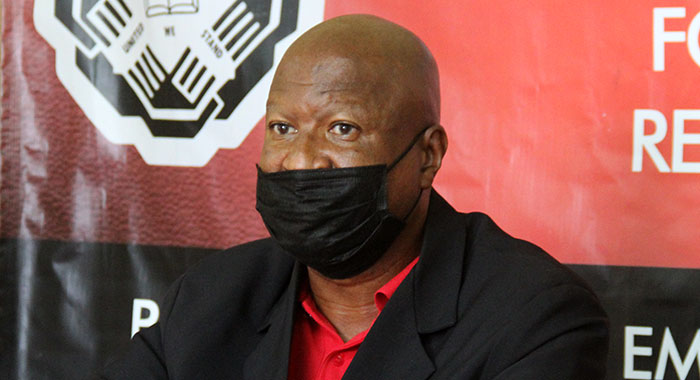 The St. Vincent and the Grenadines Teachers’ Union is encouraging the nation’s educators “to be calm, to be patient, continue to prepare” as children return to the physical classroom on Oct. 4, for the first time since December 2020.

However, union president, Oswald Robinson is asking that the Ministry of Education ensure that schools are properly sanitised and uncovered garbage bins replaced.

“We are looking forward to the reopening of school. And once everything is in place, we hope that we would have a very smooth transition back to school,” he told a union press conference in Kingstown on Tuesday.

“As you know, many of our students are awaiting face-to-face interaction with the teacher; teachers likewise, and we trust that everything would work out well,” he said.

“A lot of the parents are waiting to be relieved. Could always hear them say they can’t wait for school to reopen. You know, it has been a long period from face to face and everybody’s anxious, waiting,” he said.

The union leader’s comment comes amidst an uptick in the number of COVID-19 cases recorded in St. Vincent and the Grenadines since Sept. 13, and the first death since May, which has brought the total to 13.

Further, the country has recorded cases of the Delta, Mu, and Gamma variant of the illness amidst low vaccination rate.

Robinson said that construction is still taking place at some schools and by the middle of next week, he and the union would assess the campuses.

Further, some schools were used as emergency shelters after the April 9 eruption of La Soufriere.

Robinson said that the union met with the Ministry of Education two weeks ago and among the things that the union highlighted was the proper sanitisation of schools, especially those that were used as evacuation centres.

“I know that there are some schools in the Kingstown area which were used. Some work has started — yet to be completed. And we are monitoring that exercise very closely.

“And as I said, the IR officer and myself, we would be making some rounds to check to make sure we have firsthand information so that we’ll be able to make the necessary announcement or pronouncements and to guide our membership.”

He noted that the Ministry of Education is responsible for the maintenance and repairs of schools as enshrined in the Education Act.

Robinson said that at the recent meeting, the union“again raised the very disturbing, unsightly issue of those garbage bins which do not have lids in the vicinity and the compound of our schools.

“I told the minister about them. He took note, so I’m calling on him now to do that. I spoke with the Minister of Health earlier this year about soliciting some better garbage bins. You can’t have garbage bins without covers when we are talking about dengue fever, breeding of mosquitoes, stray dogs and all this. We have to do better than that.”

Last year, a dengue outbreak claimed eight lives, including a number of students, forcing the Ministry of Education to allow students to wear long jeans to school, instead of their regular uniforms.

“Remove the garbage bins from the schools. They’re so unsightly,” he said, noting that some were located outside the Kingstown Preparatory School and in the yard of CW Prescod Primary School.

“In fact, right in front the curriculum unit, you have a garbage bin there without any covers. It is so dirty.”

The union leader said he has been highlighting the situation since last year.

“And nobody seemed to see that that is an issue. That is a potential for vectors, for diseases, when we want our school environment to be healthy, and to be clear, and we have these things masquerading in the eyes of the public.

“So please get rid of them; replace them. Use some of the monies that you all getting. And put some proper garbage bins in place so that the lids can be covered, you could keep away some of the pests that are disease carriers.”

4 replies on “Teachers ready to return to physical classroom — union”