Two police officers die in as many days 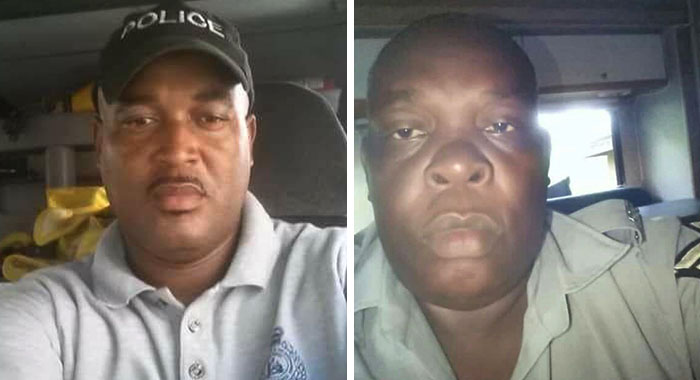 Corporal of Police Keith Matthews, left, died on Wednesday, one day after his colleague, Sergeant of Police Lawrence Thomas.

Two members of the Royal St. Vincent and the Grenadines Police Force (RSVGPF) have died in as many days.

Corporal of Police Keith Matthews died at the Intensive Care Unit at the Milton Cato Memorial Hospital (MCMH) today (Wednesday) after suffering complications from an illness, the police force said.

iWitness News understands that Matthews has been in hospital for some time in connection with a non-communicable ailment that had seen him undergoing surgery.

Matthews enlisted in the RSVGPF on Oct. 15, 2010. At the time of his death, he was attached to the fire station at the Argyle International Airport and has also worked at the Police Garage and the Mesopotamia Police Station.

“He was a hard and dedicated worker who loyally served the organisation and the people of St. Vincent and the Grenadines (SVG) for the past 10 years and 11 months,” the police force said in a press statement.

Benjamin said that Matthews always exhibited a willingness to work and was a very reliable individual.

Members of the Fire Brigade are overwhelmed by the news of Matthews’ death, Benjamin said, adding that the officer will be sadly missed.

“The Commissioner of Police, Mr. Colin John and all other ranks of the Royal St. Vincent and the Grenadines Police Force extend sincerest condolences to the family and friends of the late Cpl. 584 Keith Matthews and by extension the management and staff of the Fire Brigade,” the police statement said.

“To lose one officer is extremely difficult, but to lose another one in a matter of two days is very devastating.” The Commissioner encourages all police officers to be mindful of their health, especially in these challenging times,” John said.

Matthews’ death follows that of Sergeant of Police Lawrence Thomas who died on Tuesday at his home after complaining about difficulty breathing.

“The deceased reportedly tested positive for COVID-19 on September 17, 2021 and was unvaccinated,” the police said in a press release on Tuesday.

Commissioner John said: “Police officers are on the frontlines every day dealing with reports and interacting with members of the public. It is imperative that we take every precaution necessary to protect ourselves, our families and the general public from the Coronavirus.”

In light of this development, John encouraged all police officers to strictly observe all of the protocols and recommendations against COVID-19, especially getting tested and vaccinated against the coronavirus.

Divisional Commander of the South Central Division, Superintendent of Police Trevor Bailey said Thomas “was of a quiet disposition and did his work diligently. He had an excellent working relationship with the staff at the Calliaqua Police Station and we are devastated by the news of his passing.”

4 replies on “Two police officers die in as many days”