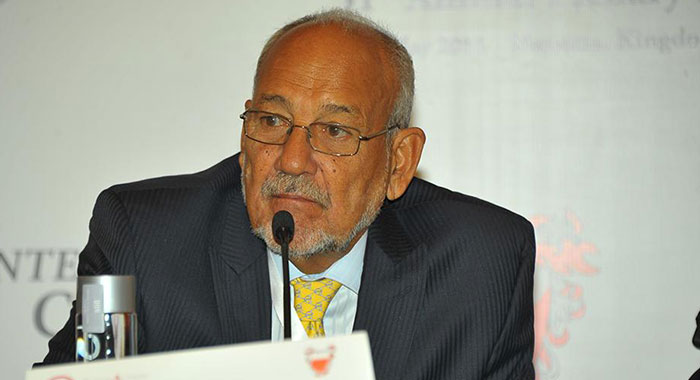 Former prime minister Sir James Mitchell is proposing that the government create a fund of EC$1 million and use it to give an EC$50 meal voucher to each of 20,000 people taking the first dose of a COVID-19 vaccine.

Sir James, who was prime minister for 16 years ending October 2000, said on WE FM on Sunday that while some people would frown on the proposal, “bribery” is not foreign to St. Vincent and the Grenadines.

“… I have a proposal on how the government can address this issue. And it is the use of the carrot — attract people and also something to look after the economy and stimulate the economy and offer an opportunity for 20,000 Vincentians to get vaccinated, who may be reluctant,” said the 90-year-old retired politician who is also a hotelier.

“The government should allocate a fund of one million East Caribbean dollars to be administered by the Hotel Association, to all the hotels and restaurants. They give a voucher for $50 to any person on getting their first vaccine,” he said on Issue At Hand.

SVG continues to struggle with low vaccination rate, with 20,165 having taken a first dose of the jab, while 13,251 have taken two doses, as of Friday, Sept. 24.

This compares to the 50,000 doses that the government had hoped to have administered by the end of March.

“Don’t tell me the money can’t be found,” Sir James said on the issue of financing his proposal.

“All you need to do is prepare the project and get it to the relevant funding agencies — the World Bank, the IMF, our local resources.

“Surely, they are individuals in Mustique who could come up with a million dollars; they wouldn’t want their names to be exposed.

“And they could, of course, hand it through the Mustique Company. But I am sure there are individuals over there, who will want to make sure that they help the tourist industry and help St. Vincent get out of this mess.”

Mustique, a Grenadine island renowned internationally as a playground for the world’s rich and famous, last week sent back 156 construction workers to St. Vincent after 18 cases of Covid-19 were diagnosed the previous week.

Sir James said that the modalities of how the EC$1 million will be distributed will have to be worked out.

“You get your first jab and you have a certified piece of paper in your hand and you collect your voucher to go to a hotel or restaurant of your choice and have a meal for $50. It could be tried — and might be nonsense.

“Some might call it bribery. But we’re not foreign to bribery here in this country anyway,” said Sir James who reasoned that vaccination is the safest and fastest way out of the pandemic.

“Look at where we are in this region. Look at the amount of deaths we have in this area. What more are we waiting on?” he said of the impact of the pandemic on the Caribbean region.

“So I put forward my suggestion. Let me see. Because I know that there are people who will go for a $50 meal at a hotel. It costs them nothing and the Hotel Association and the government will have to sort out what kind of meal and for what price will be available with all the details to be organised.” Sir James said.

“I will give the proposal my support of a million dollars for persons who want $50 vouchers, if the hotel Association thinks that it will work. I wouldn’t want to impose it on them.

“Sir James has put it out and I notice how he has put it. He says we’ll find out from the Hotel Association, the Chamber of Industry and Commerce how they feel about that.”

Gonsalves said that his government had discussed a series of initiatives to help boost vaccination levels.

He, however, noted that similar approaches have not worked in other Caribbean countries.

“And then on the basis of what happened in other countries, where apparently, the incentives didn’t work, because they had incentives in Antigua. Remember that? Lottos and all kinds of other things. But they didn’t work.

“Sir James’ suggestion may work. We have nothing to lose, but to try it. But at the same time, we have to make sure that people in the frontline be given a choice to be vaccinated or not vaccinated. And if you don’t get vaccinated, well, you find a different job. And he’s quite right,” Gonsalves said.