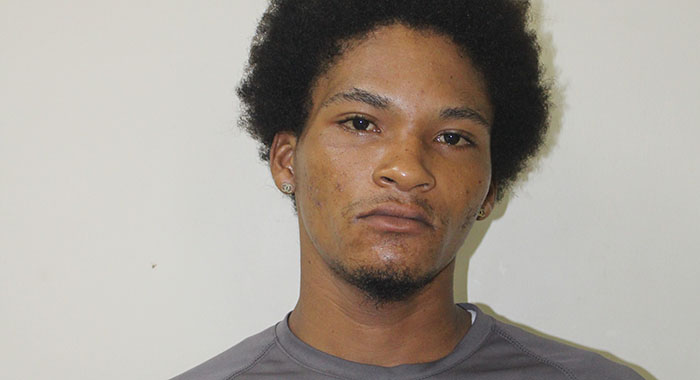 A man who police found with a gun and five rounds of ammunition in Kingstown, on Thursday, had the weapon to protect himself from former gang members, a lawyer told the court.

“He is a former gang member,” the lawyer, Israel Bruce, said of Kimron Scott, on whose behalf he mitigated amicus at the Serious Offences Court.

On Friday, at the Kingstown Magistrate’s Court, Scott pleaded guilty to a charge that he had in his possession one .38 revolver pistol, serial number 76938 and five rounds of .38 special ammunition, without a licence issued under the Firearms Act.

Senior Magistrate Rickie Burnett, before whom Scott was arraigned, adjourned the hearing of the facts and sentencing to Serious Offences Court, on Monday.

“Some of us talk about gangs in this country and we don’t know how they operate or how they sustain themselves. This morning, some of that revelation must come to the fore,” Bruce told the court.

He said Scott had worked in Mustique doing refrigeration and air conditioning but later made a stupid decision to become a member of a gang.

The answer, he said, was “None. Nothing”.

The lawyer said that it was then that Scott decided to quit the gang.

“If he thought joining was bad, leaving became worse,” the lawyer said, adding that Scott then found himself with threats over his head.

He, however, said he would not call in court the names of the “operatives” so as to protect Scott as well as the lawyer himself and his family.

“That is the reality of some young men in this country, including the one who is in this box standing right now.”

The lawyer said that his client made one bad decision after another by having a gun to protect himself.

“It is not a legal justification but I am putting before the court for mitigation purposes the social ramifications of the reality of Kimron Scott,” Bruce said.

He said that Scott had been a student at Community College but had to abandon his studies because he could not sustain his education at that level.

“There goes the saying, poverty breeds crime. This morning is a classic reality of such.”

The lawyer said that Scott was aware that he had breached the law and his disposition in the dock was an indication of what he was feeling when the court said that the maximum sentence was seven years in prison.

“A new reality struck him this morning. And other young men who are not in the court this morning — I know that journalists are here and may very well write on this story. But that information must reach out there to them that becoming members of gangs is not a solution. We should also send the message out there to let those people who are grooming our young men to become members of gangs know that what they are  doing is a disservice to the society of St. Vincent and the Grenadines.”

“That can’t be where we lose our young men to; otherwise our young women will not find good husbands.”

He said that the case was an awakening for everyone to help to save “our male species, otherwise 20, 30 years from now, if so long, we will look back in absolute dismay at what has happened to the social fabric of St. Vincent and the Grenadines.”

Bruce noted that Scott had no previous criminal conviction.

‘Friends does carry yo but…’

And, in her comments on sentencing, the prosecutor, Crown Counsel Rose-Ann Richardson said that if the court is to take what Bruce said in mitigation, it is a classic case of the saying, “Friends does carry yo’ but they don’t bring yo back.”

She said that firearm offences are very rampant in St. Vincent and the Grenadines.

“And if we are to use or take all accused persons’ word that they were holding the firearm to protect themselves because of choices that they had made, then these persons wouldn’t be punished or if they are punished, the punishment will not suit the offence”.

Richardson noted that Bruce had said it is not a legal defense when the person is holding the firearm to protect themselves.

“The prisoner is here because of choices that he made and as unfortunate as the explanation given is, he must suffer the consequence of those choices,” the prosecutor said.

The sentences will run concurrently, meaning that Scott will spend two years and two months in prison.