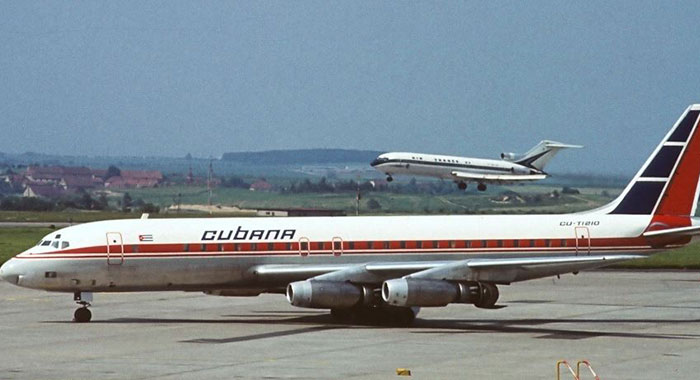 On Wednesday of this week, the peoples of Cuba, Guyana, Barbados and Trinidad and Tobago in particular, along with the majority of decent-minded persons throughout the Caribbean and the world, recall one of the most horrific events in modern Caribbean history. That fact that our population is so young  means that most of our people today would not have had to endure the tragedy that took place just off the coast of Barbados; but fortunately, the events have been recorded for history.

On that date in 1976, Cubana Airways  flight# 455, which had just left Barbados’ Seawell Airport (as it was then called) bound for Havana with stops en route in Kingston, Jamaica and Santiago de Cuba, plunged in the sea just off the west coast of Barbados. The plane had only minutes before taken off from Seawell when a bomb planted on board exploded, and though the pilot tried valiantly to return to the airport, it crashed into the sea killing all 73 persons aboard.

The 25 crew members and 48 passengers included the entire young 24-member Cuban national fencing team, which had just won every gold medal available at the Central American and Caribbean Championships, eleven Guyanese nationals, among them eight who were studying in Cuba plus a grandmother, her daughter and nine-year old granddaughter. Five citizens of North Korea, flying from Guyana to Havana were also among the victims.

Hours after the tragedy, police in Trinidad arrested two Venezuelans, Freddy Lugo and Hernan Lozano, who had boarded the plane in Trinidad, but disembarked in Barbados after planting the bomb. Arrested after they flew back to Trinidad, they confessed to be acting under the instructions of two well-known anti-Cuba terrorists Luis Posada Carriles and Orlando Bosch. These two, Carriles and Boch were also arrested and charged. However, while the Venezuelan men were jailed for 20 years each, the organisers, known to be operatives of the US Central Intelligence Agency (CIA), were never punished for the dastardly deed.

It was the Caribbean’s equivalent of what took place in the United States itself, 25 years later, the terrorist attacks in New York and Washington, commonly referred to as 9/11 (month and date). This stands as the worst such terrorist activity in Caribbean history and can rightly be called the Caribbean’s 9/11.

As we recall this murderous deed, we cannot but not only extend our solidarity with the relatives of the murdered ones, but also express our absolute abhorrence, not just at this deed, but that the perpetrators were allowed to go unpunished. Carriles and Bosch continued to live in Miami, shielded from the law. That the United States, which displayed such indignation about the terrorist attack on its soil and citizens should give succour to such murderous terrorists continues to defy all semblances of decency and respect for human rights.

On this occasion we, the friends of Cuba, Caribbean patriotic citizens, reiterate our utter rejection of terrorism and violence and note that to this date the relatives of the victims who perished on CU-# 455 have never been compensated. We call for an end to this hostility towards Cuba on the part of the US government, as manifested in the unjust embargo, and again repeat our call for normalisation of relations between both countries.