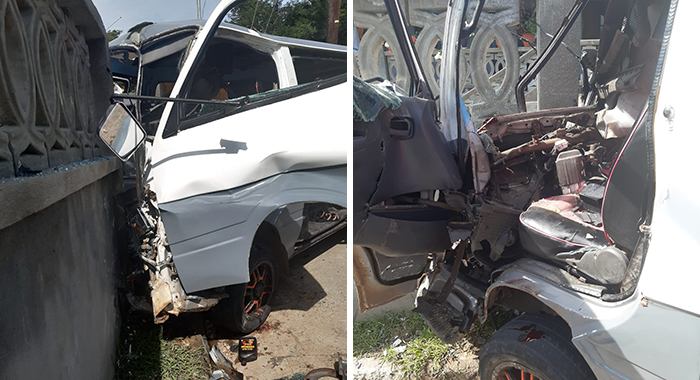 The van at the scene of the accident.

Four people were airlifted from Union Island to St. Vincent today (Tuesday), after they sustained broken bones and other injuries when a minivan crashed in the southern Grenadine island around 3 p.m.

iWitness News was reliably informed that three passengers — two males and one female — as well as the driver of the vehicle sustained injuries during the accident in Donaldson, Clifton.

A source speculated that the brake failed as the vehicle, HN 807, was travelling down a slope, causing the driver to lose control of the minivan, which crashed into a concrete perimeter wall.

Videos circulated on social media showed the mangled vehicle against the wall.

Two aircraft were chartered to transport the injured people to Argyle International Airport, a 20-minutes flight away.

It was not clear to which medical facility the injured were taken when they arrived in St. Vincent, but both the Georgetown and Kingstown hospitals are located an equal distance from the airport.

The Stubbs Polyclinic is about 20 minutes drive from the airport.

One person who spoke to iWitness News noted that relatives of the injured had to charter the aircraft to bring them to St. Vincent and raised questions about the medevac vessel that the government purchased last year for that purpose specifically.

In October 2020, the Government of St. Vincent and the Grenadines officially received an EC$4.3 million Coast Guard medevac vessel to be used to transport ill people throughout the archipelago.

This means that it would take just over one hour to travel the 41 nautical miles between Kingstown and Union Island.

One reply on “Injured airlifted to St. Vincent after van crashes in Union Island”